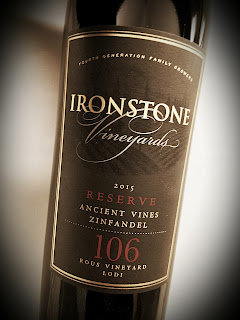 Old vines are appreciated the most in Zinfandel vineyards.  California's heritage grape has been growing nonstop in Lodi for more than a century, and the older the vines are, the more character the wine has.  I don’t know about people who stay away from Zinfandel, I don't trust them.  Once you’ve had an old vine Zin, how could you ever go back to Merlot?

A recent virtual tasting of old vine Zinfandel wines from the Lodi region featured three people who are delightfully nerdy (watch) and incredibly passionate about their Zinfandel.  The online session was held on National Zinfandel Day and led by Stuart Spencer, of St. Amant Winery and the Lodi Winegrape Association.  He was joined by Kevin Phillips, of Michael-David Vineyards and Kyle Lerner, Harney Lane Winery.  They focus on Zinfandel with a love not just of the grapes and the wine, but of the character and history of the vineyards and those who planted them so long ago.

The Rous Vineyard dates back more than a century, to 1909.  The ten-acre plot in the Mokelumne River appellation is the source for Ironstone Vineyards' Reserve Old Vine Zinfandel.  Craig Rous bought the vineyard in 1994, when it was contracted to provide grapes for White Zinfandel production.  Thank you, white Zin, for possibly saving this vineyard's ancient vines, preventing them from being ripped out and replaced by some other variety.

This wine is 100% Zinfandel at 15% abv, so you know it’s there.  It aged for ten months in small French oak barrels and I see it selling for around 20 bucks.

This deep ruby wine smells like a blackberry fire, all dark fruit, spice and smoke.  There's a cinnamon aroma that should prove irresistible over the holidays.  The flavors made me sit down the glass and say, "my god, that tastes good."  That doesn't happen often enough.  Black cherry, sage, eucalyptus, cola, coffee grounds - its complex and savory.  Oak is very present, but not a pest.  The tannic structure doesn't go unnoticed, but stays pleasant enough for sipping.  Pair it with pulled pork or a ham sandwich.