We met a couple of friends at Luna Park on La Brea recently - great for the food and wine, not so great for conversation - and amid the pounding of the dance floor music I spied an interesting note on their small list of daily "Blue Plate Specials."  Two Spanish wines - unidentified red and white -  for $6 per glass.  That seemed too special to let it pass by, so I had one of each. 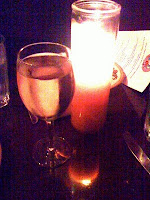 The Spanish Quarter is the producer of the white.  It's a delightful blend of 60% Chardonnay and 40% Albariño from the Costers del Segre region in Catalonia.  The Albariño, I expect in a Spanish wine, but the Chardonnay is a surprise.

The wine is a rich golden color in the glass, but the deeply chilled wine bears a nose that is a bit closed.  That disappoints me, as I love the wonderfully aromatic aromas of Albariño.  The taste is laden with minerals, with a clean and crisp edge to the tart peachiness.  It's quite a nice white, with a good acidity to lift it above the level of a mere sipper.  It paired nicely with veggie risotto. 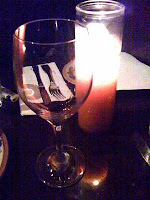 The red wine is a Syrah - they call this "Shiraz" - from Opera Prima, a winery located in La Mancha.  There's a lot of blackberry on the nose along with the scent of meat.  It's quite an earthy aroma.  On the palate, Opera Prima also shows an earthy, beefy edge to the fruit with peppery notes.  It drinks like a much more expensive wine.  I'll keep them in mind.  As for the picture, I'm sorry I neglected to take a photo before consuming the wine.  As you can see, I enjoyed it.

The kicker is that Luna Park had a special of half off the entire bill that night!  So these two $6 wines actually only cost $3 each.  I love a good wine bargain, and I got two of them on this trip.  It eased the headache produced by the loud music in the restaurant.
Posted by Randy Fuller at 11:44 AM