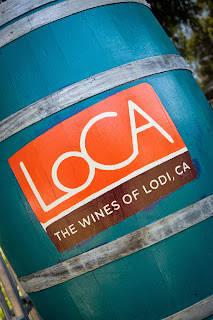 The wine community in Lodi, California really has a handle on how to get the word out about their grapes and wines. The series of virtual tasting events - based on Twitter, with a separate live video feed - are always well attended and and overflowing with great information about the region and its winegrowers.

It’s no surprise that the Lodites - Loditians? - have quickly mastered a social media art form that is rather new to them. They have had the farming thing figured out for generations. When they decided to start making their own wines instead of trucking the fruit of their labor down the road to be made by others, they hit the learning curve on the high side.

The periodic virtual get-togethers are a great way to showcase their wines and display publicly all the nice things that tasters have to say about them.  The most recent event featured four wines, two white and two red. The twist this time was a cheese pairing component, with select cheeses matched up with the wines. Here are the participating wineries and cheeses:

The tasting session was hosted by Stuart Spencer, owner and winemaker at St. Amant Winery and Program Manager at Lodi Winegrape Commission, who was joined by Cindy Della Monica, owner & cheesemonger at Cheese Central.

The wines on the list are are sustainably grown in adherence to the Lodi Rules™ for Sustainable Winegrowing - California’s first third party certified sustainable winegrowing program, which was launched in 2005. The cheeses are eco-friendly, too.

As described online, “Lodi Rules™ takes a comprehensive approach to farming that goes beyond just pest management to promote practices that enhance biodiversity, water and air quality, soil health, and employee and community well-being.” The program includes more than 85 farming operations, and 20,000 acres of Lodi vineyards have been certified.

“For a wine to bear the Lodi Rules™ seal of approval, its composition must be made up of at least 85% of fruit which has been sourced from a vineyard certified under the Lodi Rules™ program, meaning that the vineyard has passed an independent, peer reviewed audit of 101 farming practice standards which have been accredited by Protected Harvest, a non-profit organization of scientists, academics and environmentalists. Over twenty wineries now produce wines that bear the Lodi Rules™ seal on the label.”

Located at the base of the Sierra Nevada Mountain range, Lodi is about 100 miles east of San Francisco and 35 miles south of Sacramento. It has been a major winegrowing region since the 1850’s, and now home to over 100,000 acres of premium vineyards farmed by more than 750 growers.

Watch this space for details on some of the individual wines included in this virtual tasting.