A Great Zinfandel For Half Its Original Price 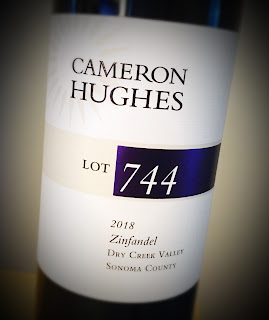 Hughes' Lot 744 is a 2018 Zinfandel from Sonoma County's Dry Creek Valley, a small AVA tucked in between the Russian River and Lake Sonoma.  Hughes says that despite being a wine travel destination, Dry Creek Valley is still "a tiny, rural area filled with family-owned vineyards, one deli, and no traffic lights."  I do understand that neighboring Geyserville has a signal, but it may be flashing most of the time.  Hughes raves about Dry Creek Valley Zins, which he feels are benefited by the region’s unique dynamic.

This Zinfandel, Hughes says, is a "stylistically perfect gem" from a family winery that has been crafting top rated Zinfandel for decades.  He feels that Lot 744 is easily one of the best Zins he has ever gotten his hands on.  Alcohol checks in at a lofty 16% abv and it sells for $17 - half the original price.

This Sonoma County Zinfandel has a medium dark ruby tint to it, and it smells of brambly raspberry and blackberry with an undercurrent of leather, cigars and spice.  The nose doesn't really foretell of an amazing palate experience, but that's what it delivers.  The fruit is carried along on a savory wave of earth, minerals and tobacco.  Oh my, this is a good Zinfandel - and I would say that even if I were not a big fan of the grape.