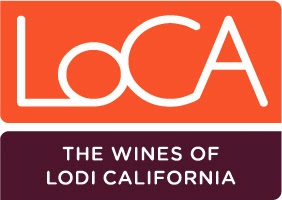 The wines of Lodi, California have had my attention for some time.  The region - roughly south of Sacramento and east of San Francisco - produces some big, bold Zinfandels, which I love.  They are also producing some even more exotic grape varieties, like Carignane, Cinsault and Spanish varieties.  More to the point, they are looking for their identity, wondering whether Zin is their “calling card” grape or if a more eclectic approach will define the region.

A recent article by San Francisco wine writer Jon Bonné centered on Lodi’s reputation as a producer of cheap, sweet bulk wines.  He mentions how “grapes” have long been the focus in Lodi, not “wines.”  But some of the growers who contributed so many grapes to so many supermarket wines have been establishing wineries of their own, raising the growing standards in the vineyards and reaching out through various media channels to make the public aware of the work that’s being done there.

One of those media channels happens to be a public relations firm who offered to include me on a virtual tasting session of Lodi wines, an offer I was happy to accept.  The wines described here were provided to me for the purpose of the virtual tasting.Conducting the tasting session were folks from families that have been in the Lodi wine industry for generations.  Stuart Spencer - Program Director for the Lodi Winegrape Commission and second generation Winemaker for St. Amant Winery - co-hosted the virtual tasting with fifth generation winegrape grower and Director of Winery Operations at LangeTwins Family Winery & Vineyards, Randy Lange, and Farrah Felten-Jolley of Klinker Brick Winery.

The trio appeared in the video stream in front of a banner reading, "What you call crazy, we call passion."  Passion is the focal point of what has turned Lodi into a premier winemaking region.  Spencer referenced the fact that most of the Lodi wineries are family affairs, and the wine culture in Lodi comes through years of farming families.

The participants who took part in the tasting chimed in their thoughts on Twitter.  One tweeter said, "Lodi is specifically suited for white Iberian varietals like Albarino and Verdelho," while another commented that "'Sons of Anarchy' is set in a town near Lodi."  That prompted the question, "But do they drink Lodi wines?"  Another speculated, "I'll bet Jemma does!"  Yet another figured, "I'll bet Tara does!"

Lodi boasts some 85 wineries, 60 of which have tasting rooms open to the public.  Over 70 grape varieties are growing there.  Representatives of Lodi Wine were in on the tweets, too.  "When we say "old vine" here in Lodi we're not kidding.  Many old vines are over 90 or 100 years old."  "Lodi is comprised of 100,000-plus acres of premium winegrapes, farmed by over 750 growers."  "Lodi is California's leading producer of Cabernet Sauvignon."  In fact, they say, "Lodi has been growing Cabernet for a long time; we produce more Cabernet than Napa & Sonoma combined."

Klinker Brick Winery's Farrah Felten-Jolley represents the sixth generation of the Felton winegrape-growing family, a status that is not uncommon in Lodi, where so many families have a very long tradition of digging the earth.

Bricks & Mortar Red Blend 2011 is an interesting blend from the Mokelumne area of Lodi:  60% Cabernet Sauvignon, 30% Petite Sirah and 10% Zinfandel, all wrapped up in American oak.  It's a heavyweight, at 15% abv, and it retails for $30.

Tweeters commented on every aspect of the wine.  "The Petite Sirah gives it oomph."  "The packaging really stands out on a crowded wine shelf."  "Dark, rich, legs all day long with big tannins & great plum palate."  "Five spice & slightly minty toasted oak on the nose.  More on the palate + dark berries."

The Klinker Brick Bricks & Mortar is dark ruby in the glass, with a nose that's colored in dark fruit and lively spices, notably vanilla and clove.  The fruit aromas are beautiful - plums, blackberries and a slight raspberry note.  On the palate, more dark fruit and more oak spice.  Pencil lead shows up, but is obscured by a hint of eucalyptus and some mighty delightful cigar box flavors that highlight the spicy nature of the wine.

Four other wines were included in the virtual tasting, which I will cover separately in the near future: