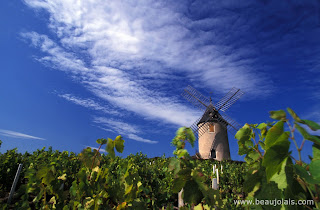 Picturesque Beaujolais is sometimes called "the Tuscany of France," with vineyards covering nearly every hillside.  Beaujolais produces the most single-variety wines in France, and 99% of their production is made from the Gamay grape variety.

Moulin-à-Vent is one of the ten crus of Beaujolais, the French wine region lying between Burgundy and the Rhône valley, claimed by both. The wines of Moulin-à-Vent are robust and some of the most age-worthy wines in Beaujolais.  The soil in Moulin-à-Vent is said to have a rather high manganese content.  This mineral is actually toxic to grapevines in high concentrations.  In Moulin-à-Vent, the manganese level is just high enough to cause the vines to produce limited yields.  This makes the wine’s aromas and flavors quite intense. 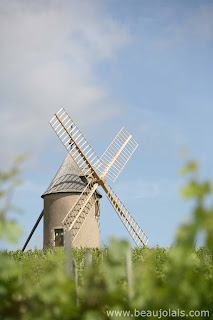 The 15th-century windmill in the image overlooks the appellation and gives the region its name.  It has not been used functionally for years, but it serves as one of the most striking visuals in Beaujolais.

Wine importer Kermit Lynch brings this gem to the U.S. It is a widely-held belief that when you see Lynch’s name on the label, you can feel safe that the wine will be good. I've never found a wine that shook that belief. He only imports wines that he feels worthy of being imported. Domaine Diochon Cuvée Vieilles Vignes 2012 is one of those wines.

Domaine Diochon is situated literally across the road from the namesake windmill in the photo. What is described on Lynch’s website as the :old-fashioned way" of Beaujolais production has been the story at Diochon since 1935.  Bernard Diochon took the responsibility from his father in 1967. Now, Thomas Patenôtre is the man in charge since Diochon’s retirement eight years ago.

Diochon likes wines with guts, but not too much weight. "I like tannic wines without heaviness; with fruit and floral aromas," he said. "Every vigneron naturally chooses to make wines in the style they prefer." Lynch pulls no punches on how much he appreciates Diochon’s "ancestral methods that distinguish real Beaujolais from the mass-produced and highly over-commercialized juice that floods the market today."

The wine embodies whole-cluster fermentation in cement tanks, oak aging over half a year and unfiltered bottling. Plenty of minerals are given to the wine through the loose, granitic soil in which the Gamay grapes grow on sustainably-farmed vines that range from 40 to 100 years old.

This great example of Beaujolais cru has a beautiful, deep, rich color. Minerals decorate the nuances of the nose, with cherry and black currant taking on earthy notes. True to Diochon's words, the wine feels light in the mouth with a firm tannic structure. Acidity is radiant and it finishes long and luscious.

Pierre-Marie Chermette is described as a pioneer of sustainable wine growing in the Beaujolais. His laissez-faire technique means little or no filtration of the wine and no chaptalization, allowing the grapes to speak of the terroir in their own voice.

Les Trois Roches 2012 brings the terroir of Moulin-à-Vent to the forefront in a lovely wine, purple at its core with a little brick color around the edge of the glass. The nose is explosive with cassis and blueberry, in a perfumed earth framework. The palate has dark fruit and pomegranate flavors, deep and luxurious. Great mineral notes and a bracing acidity again display the region’s strong suits, and firm tannins allow for the wine to take a seat at any dinner table. It finishes with a slight tartness of black raspberry.