A recent virtual wine tasting event featured LoCA, the Wines of Lodi and the second vintage release of the Lodi Native project. The event is chronicled on the Twitter hashtag feeds at  #LodiLive and #LodiNative.

Lodi Native is a collaboration of six winegrowers who are highlighting Lodi's unique sense of place by focusing on single-vineyard Zinfandel selections from the region. Each wine benefits from native yeast fermentation, zero new oak, and a “hands-off” approach in the vineyards and cellar, allowing the terroir-driven fruit to speak for itself. It's an effort that any Zinfandel purist can appreciate.

The six labels involved in the Lodi Native project - McCay, Macchia, Fields Family, Maley Brothers, St. Amant and m2 Wines - are winegrowers as well as winemakers, as are the majority of Lodi’s producers.  Here are the wines tasted and tweeted about during the virtual event: 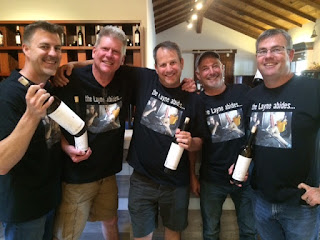 Last year's inaugural releases were astounding. The bar was set high, and the Lodi Native growers and producers jumped at the chance to match - or exceed - the quality of the 2012 wines. These wines are all available at the respective wineries and at the Lodi Wine & Visitor Center only. Check here for more information on availability. I was invited to take part in the virtual tasting event and was provided samples of the wines for that purpose.

Layne Montgomery’s m2 wines has recently moved from its industrial park locale into a brand new winery with a tasting room, but they are quick to point out that it's still all about the wine - not the bells and whistles. Fifth generation grower Kevin Soucie presided over these grapes, from the
oldest block of the vineyard. I’m told the soil is very fine silt with the consistency of talcum powder.

The social media banter for the Soucie Vineyard Zin was feeling the tastings by the time we rolled around to it. @Fiery01Red quoted winemaker Montgomery’s quip that "’Food wine’ means ‘this wine sucks unless there's ketchup.’" Montgomery is the Layne, by the way, in the group’s T-shirts which read “The Layne abides.” @MsPullThatCork like his notion that  "Wine will talk to you if you will listen to it." That got him tagged in the lively group as The Wine Whisperer. There was a pairing suggestion from @FrugalWineSnob: “OUTSTANDING. We're pairing this with watermelon!” Well, I think this wine deserves much better than that.

There were some who were paying attention. @Lodi_Wine chipped in with the fact that “Soucie Vineyard is the closest of all the Lodi Native sites to the Sacramento/San Joaquin River Delta's cooling breezes,” which is said to contribute to the wine’s lush and pungent earthiness. @BrittanyCurran tweeted about the vineyard. “Planted by Soucie’s grandfather in 1916.” Brittany also thought, "It's pretty damn good." And after all, isn't that what really matters?

The wine is extremely dark and smells of smoke, cassis and blueberry, but the blueberry really comes forward on the palate. The powerful fruit flavor display is set off by a dramatic show of spices - nutmeg, sage and vanilla appear in abundance. The vanilla lasts all the way through the very lengthy finish. A brambly component acts as the anchor that keeps all this magic from spinning out of control. There is backbone to spare, too. The tannins are firm and brawny enough for a big ol’ ribeye this thick. The Soucie Vineyard Zinfandel is complex and almost brooding, with a rustic character juxtaposed against its elegance. It will go as well with a checkered tablecloth as it will with fine, white linen.