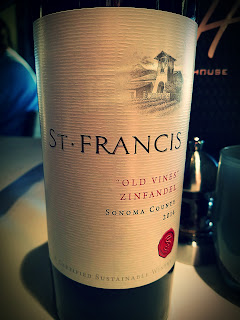 Southern California local heroes The Hickmen do a song called, "Costco Socks," which decries the big-box life that took over/ruined the Inland Empire and countless other communities across America.  I personally don't have a vehicle large enough to accommodate a Costco shopping trip, nor the home space in which to store all that stuff.  There is, however, a good reason to go to Costco if you're a wine lover.  They put some pretty damn good wine on their shelves.

One of them is the St. Francis "Old Vines" Zinfandel, Sonoma County 2014.  I had this tasty wine at the Chart House restaurant in Redondo Beach, a gift from our table mates.  They know I have more than a passing interest in wine and were almost apologetic when they told me they got it at Costco.  I reassured them that Costco does a very good job of seeking out great wines to lowball on the price tag.  I resisted the urge to admonish them for buying from a big box store instead of a local wine dealer, gift horse in the mouth, and all that.  Maybe I’ll buy them a download of "Costco Socks."

Joe Martin started growing grapes in Sonoma County in 1971, and founded the St. Francis winery eight years later.  Based in Santa Rosa, St. Francis grows certified sustainable grapes.  This wine is labeled as "Sonoma County," although St. Francis produces several single-vineyard Zinfandels as well.  The winery says winemakers Katie Madigan and Chris Louton who make the fruit-driven St. Francis bottlings also have access to "some of the most coveted old vines" in Sonoma.

The grapes that went into the bottle were 83% Zinfandel, 11% Petite Sirah, 5% mixed blacks and 1% Primotivo. Mixed blacks is the term used in old field-blend vineyards which feature different varieties growing together.  Aging was done over 16 months in French oak barrels and the alcohol hits a lofty 15.2% abv.  Retail price is $22, probably cheaper at Costco.

The 2014 St. Francis "Old Vines" Zinfandel has a beautiful nose, showing lush raspberry, black cherry and spice all over the place.  The dark palate provides a boatload of black raspberry and blackberry, with a slightly savory spot sneaking its way through the fruit display.  It drinks remarkably easy, considering the alcohol number, but has enough tannins for the swordfish and spaetzle with brown butter and bacon maple.  (I know, right?)  However, I could have gone with the filet and been just fine.