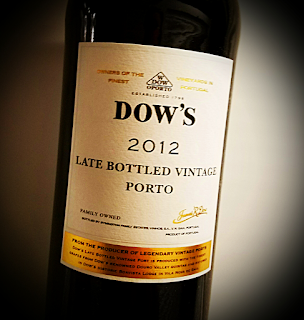 Before the Port season slips away, here's a 2012 Vintage Port you should try.  Of course, it's always Port season for some, but the style does fit better with cooler - colder - weather and more robust meals.

Houston Porter writes on Petaluma360 that Port is just one in the family of fortified wines, which includes Madeira, Marsala, sherry and vermouth.  True Port wine comes from Portugal, although many wineries use the term to market their own bottlings.  Technically, Porter writes, to be called port the grapes must be grown, crushed, fermented and initially aged in Portugal's Douro Valley, the world’s "oldest demarcated wine region."

Port wine blossomed in the 1700s when England was at war with France and sought to replace the French wine they couldn't get anymore.  Many Port houses still have English names, like Dow.  The reds are made from grapes with names like Touriga Franca, Tinta Roriz, Tinta Barroca and Touriga Nacional.

Port requires at least two years aging.  Ruby Ports are aged mostly in bottles, while the tawny style is aged in barrels.  Ruby generally shows more fruit flavor as a result, and tawny is a more savory wine.

Dow's 2012 LBV comes from the Quinta do Bomfim and Quinta da Senhora da Ribeira vineyards.  The Symington family winemakers have tended those plots for five generations. I'm told that 2012 was a very dry year in the Douro Valley, but cooler-than-average summer temperatures helped offset the drought.  The alcohol hits a typical 19% abv level and the wine retails for $24.

I won't beat poetically around the bush.  This vintage Port (2012) is nothing short of astounding.  It's got the savory nose one expects on a tawny, but bigger, blacker, more brutish.  A heavy whiff of smoke never goes away, and the earthy aromatics stay right behind.  The palate lets the fruit shine through, sweet and sultry, with an amazing level of acidity and oh-so-firm tannins.  It's a great sip, but I'm saving the last glass to have with a steak.