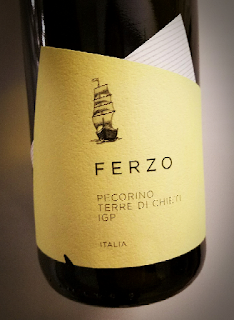 A ferzo is a patch of fabric stitched together with others to form a sail or a flag, and it's the central idea behind Ferzo's patchwork of vineyards.  Ferzo says their wines grow out of  "small-scale, highly selected viticultural operations in the skillful hands of local vintners."  The grapes come from Abruzzo, in the broad province of Chieti.

The Winebow Group explains, "the vineyards that source Ferzo Terre di Chieti Pecorino are found in the rolling hills that stretch between the Adriatic Sea in the East to the Appenine Mountains in the West.  The relationship between mountains and sea is always felt in this part of Italy as temperature variations yield a constant breeze known here as the "brezza di terra".

The Pecorino grape is named for sheep, which apparently like munching on this particular fruit. The varietal wine is fermented and aged in stainless steel, getting three months in the tank and one in the bottle.  The alcohol clocks in at 13% abv and it retails for $26.

The nose comes on with a healthy whiff of lanolin and citrus, salinity on the side.  It's a savory sniff, with the ocean taking the forefront while the fruit plays a lesser role.  On the palate, the salty feel stays the course, while apricot, lemon and orange come through on a wave of nuttiness.  The wine finishes tart and refreshing.