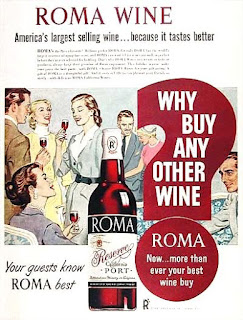 Old time radio dramas are a favorite way for Denise and I to while away the time behind the wheel, and in Los Angeles, we get plenty of that.  We love listening to "Johnny Dollar," which has to be the only dramatic presentation - besides "Double Indemnity" - to present insurance work as an action plot.  I love injecting my own commentary into the slow spots.  "Listen Dollar, give me half a chance and I'll give you no quarter.  Not on my dime.  Penny for your thoughts."

"Suspense" is a particular favorite of ours, and I often hear the announcer say the show is sponsored by "Roma Wines - America's largest selling wine!"  I had never heard of Roma Wine, and was curious about the company's history.  Here's what I was able to dig up.  Most of the information here comes from an article on a website called Old And Sold.  The article - first published in 1955, but I don't know where - covers a number of now defunct California wineries in detail, and Roma is one of them.

The tiny Roma winery was already in existence in 1915 when brothers John Battista and Lorenzo Cella bought the winery, then located in Lodi.  In 1933 the company bought the Santa Lucia Winery, and the entire operation was moved to Fresno.  By the late 1930s Roma had become the world's largest wine producer.

In 1942, the Cella family bowed out and sold to Schenley Industries (the first corporate wine takeover?) and that company broadened Roma's scope even further.

In 1955, the Roma winery in Fresno had a storage capacity of 16,700,000 gallons of wine, with another 7,800,000 gallons of storage at their Kingsburg facility.  Together, the two wineries could store about as much wine as the state of Washington produced in 2009.

Quoting from the article: "With minor exceptions all Roma dessert wines are produced from grapes grown in the San Joaquin Valley within a radius of sixty miles of the Fresno winery. White grapes represent about 70 per cent of the total volume crushed and include chiefly Muscat of Alexandria, Feher Szagos, Palomino, Malaga, and Thompson Seedless, the last two varieties being used principally for the production of brandy and grape concentrates. The most important dark grapes used are Zinfandel, Petite Sirah, Mission, Grenache, Carignane, and Salvador."

By the mid-1950s, Roma had begun bottling their wines in their "new, dripless bottles."

For what looks to be a fairly complete listing of Roma's wines, I'll quote again from the article:

A specialty is the Creme de Roma, a liqueurlike wine consisting of sherry with flavoring added and containing 18 per cent alcohol by volume.

It's interesting to note not only what grapes were being grown in California in the mid-'50s, but the references to Chianti (red and white), Burgundy, Sauterne and Chablis.

Details after 1955 are a bit sketchy, but it appears the Roma brand was still active as late as 1971, when Schenley Industries sold the winery and vineyards to Guild Wineries and Distilleries.  The sale seemed to have generated some legal issues, but I could not follow the thread any further than that.  If you know more about Roma Wine, I'd love to hear about it.

If you'd like to dig a little deeper, here's an oral history of the John B. Cella Family in the California wine industry.