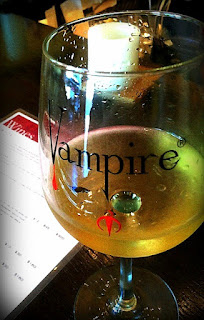 If you’re going to celebrate Bastille Day with wine, I suppose it had better be French.  It was quite by chance that I happened to be sitting with a Roussanne before me on the French holiday.  I was in Beverly Hills, and it was a Paso Robles Roussanne, but it still had its roots in the Rhone Valley.  I mentally waved a little tricolour while I sipped.

The Roussanne in question is from Vampire Vineyards.  Their Roussanne provided a nice break from a rather hot afternoon in Beverly Hills.  The Vampire Vineyards tasting room is on Little Santa Monica Boulevard, right across from the Peninsula Hotel.

The nose has notes of tangerine, almond and oak spice.  The oak makes quite a prominent play in this wine.  On the palate, tangerines, peel and all, dominate the flavors.  Some blues on the sound system provided an American twist to the moment. 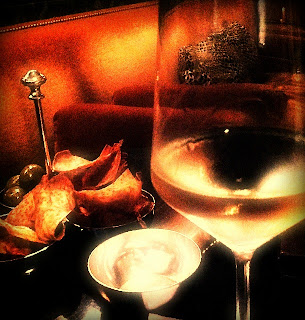 Later, also quite by chance, I found myself in the bar at the Peninsula.  I figured as long as I was killing time, I might as well have a more internationally suitable wine for the day.

I settled back into the plush couch with a Pascal Jolivet 2010 Sancerre, from the Loire Valley.  Soils of clay, limestone and flint result in a mineral-driven nose of rocks, apples and pears.  The palate is vibrant and fresh. Fruit in the form of golden apples and lemon rind are plain enough, but the minerality is in the driver's seat. The wine is vinified in stainless steel, but picks up complexity during the four to six weeks it sits on its lees.  Sinatra and cool jazz waft from the ceiling while I enjoy my own private Bastille Day.