It was a perfect mid-February, Southern California Saturday for a trip out of Los Angeles.  We enjoyed sunny, warm weather as we headed north on the 101 Freeway toward Santa Barbara wine country.  We didn’t have to do much work - our car knows the way very well.  We were bound for the Garagiste Festival: Southern Exposure, amidst the windmills and wine bars of Solvang.

The Garagiste Festival began in Paso Robles, an effort to spotlight some of the many small-production winemakers in that region.  The festival’s name comes from the French word that describes small, maverick wine producers operating in garages instead of chateaux.  Most of the producers who pour at the Garagiste events have no “winery” - they buy grapes directly from choice vineyards and turn them into wine in unheralded, low-overhead locations.

Stewart McLennan and Doug Minnick are co-founders of the Garagiste Festival, Lisa Dinsmore is the Event Director and Melanie Webber handles the public relations.  Billing their new festival as “the first and only event dedicated to celebrating and promoting the artisan winemakers of the Santa Ynez Valley,” the team has set their sights on further expansion.  They envision Garagiste events held all year long in various parts of California.  I can’t wait to hear where the next new entry will be.  They should all be as well-received as the first two.

The winemakers and wine tasters aren’t the only ones to benefit from the California Garagistes.  In January, Cal Poly’s wine and viticulture program got a check for $10,000 from the Garagiste Festival’s Paso Robles event, and the Southern Exposure version promises more to help pave the way for future winemakers.


The Artisans and Their Wines 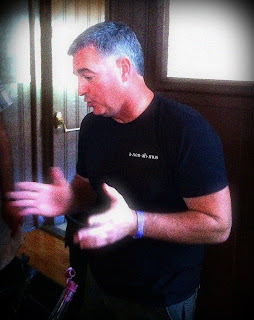 A-Non-Ah-Mus
Winemaker Ron Hill’s (right) 2009 Babcock Vineyard Pinot Noir ($44) shows black tea and cola notes, while his 2009 Grenache ($30) and 2009 Syrah ($35), both from Alisos Vineyard, are dark, funky and loaded with acidity.  His new Syrah rosé (barrel sample) has a nose exploding with candy and flowers.  It’s due for release in March or April.

Autonom
Paul Wilkins makes wine for Alta Maria Vineyards and Native9, but he can’t get enough of it.  Autonom is his solo project, focusing on very limited-release Rhone varieties.  His 2009 “Law of Return” Grenache ($44) sports a 5% splash of Syrah and shows cherry and a hint of funk on the nose.  Nielson Vineyard fruit is lovely.  The 2009 Rhone Cuvée ($32) allows the Laetitia Vineyard Syrah to drive, with 30% Grenache riding shotgun.  Earth and bacon await. 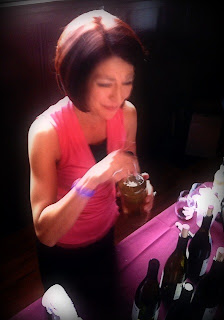 C. Nagy
When Riverbench winemaker Clarissa Nagy (left) has some alone time with winemaker husband Jonathan, they make more wine.  The 2011 Bien Nacido Pinot Blanc ($25) is a pure joy, the 2010 Garey Ranch Pinot Noir ($48) is huge and dark and the 2010 White Hawk Vineyard Syrah ($30) shows some Southern Rhone funk.  Look for the 2012 Viognier in May, with tangy White Hawk fruit.

Center Of Effort
Named for a sailing term describing the most efficient point on a sail, COE gets winemaking direction for its Burgundian wines from Mike Sinor when he’s not busy at Ancient Peaks.  The 2010 Pinot Noir ($40) is extremely aromatic and bold on the palate.

Cordon Wines
Winemaker Etienne Terlinden (also of Summerland) says of his 2011 French Camp Zinfandel ($23), “I do this Italian style, picking the grapes earlier for a higher acidity level.”  It shows spice and vanilla on the nose and a slight bramble on the palate.  His 2010 White Hawk Syrah ($26) gives a lovely herbal scent with very dark blackberry flavor. 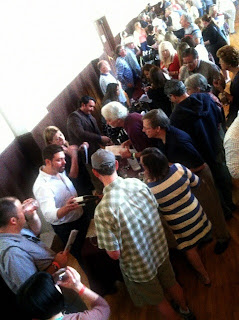 La Fenêtre
Winemaker Joshua Klapper (right, pouring in lower left) always seems to have the busiest table at every wine event where I see him.  I took the photo from the stage above him, in case I couldn’t get any closer.  Happily, I did squeeze my way through for a taste of his 2010 Bien Nacido Chardonnay ($39).  Eighteen months in French oak - 20% of which is new - imparts a butterscotch essence to the already smoky fruit.

Luminesce
Soft-spoken winemaker Kevin Law is not exactly a “born promoter,” preferring to let his wines speak for themselves.  A pair of Pinot Noir - 2011 Arroyo Grande ($28) and 2010 Presqu'ile Vineyard ($44) - are impressive for dark aromas and fruit.  Smoky on the former, fruity on the latter.  His 2010 Santa Barbara Syrah ($26) is dark as well, with a beautiful layer of acidity.

Native9
James Ontiveros worked hard to reclaim a portion of the land that came to his family as a Mexican land grant nine generations ago.  It’s mainly a cattle ranch now, but he has his dream of an eight-acre vineyard.  His 2009 Pinot Noir ($64) is very dark and laced with smoke.  The 2010 Pinot ($64) seems better integrated.

Refugio Ranch
Ryan Deovlet makes the wine for the Gleason family, and the 2010 “Tiradora” Sauvignon Blanc ($28) shines with just a hint of grass and great acidity.  The 2009 Barbareno ($42) is two-thirds Syrah, one-third Petite Sirah - extremely aromatic and loaded with blackberry. 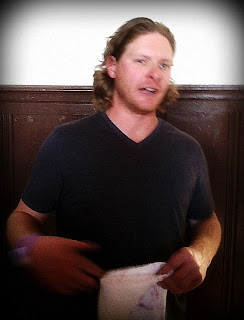 Roark Wine Co.
If there’s anything to be said for being different, you can say it about Ryan Roark (left).  He makes Chenin Blanc, Malbec and Cabernet Franc.  Oh, and something called Pinot Noir.  I love the savory edge on his 2012 Chenin Blanc (barrel sample) but his 2011 Malbec ($28) is all perfume and spice - lovely.  Roark told me his 2011 Cabernet Franc ($28) had no sulfur added to it.  When I asked if he was making a “natural wine,” he shot me a look that said he’d rather not open that 750ml bottle of worms.  He left it at, “I didn’t put anything in that wine.”  It is kinda dirty, kinda rustic, kinda spicy and kinda delicious.

Ryan Cochrane Wines
I like a guy who hits you with his clones while pouring the Pinot Noir.  Ryan Chachrane’s 2011 Pinot Noir sports clones 113, 116 and 667 from Fiddlestix Vineyard.  There's mocha on the nose and black tea on the palate.  Cochrane worried that the twelve barrels he made last year wouldn’t be enough even for garagiste status - but it was.

Seagrape Wine Co.
After Karen Steinwachs (right) turned around the wine program at Buttonwood Farms, they let her make a little something for herself.  Her 2011 Zotovich Vineyard Chardonnay ($25) has smoky tropical fruit defining it, while her “Jump Up” Sta. Rita Hills Pinot Noir ($32) has an almost bracing acidity.  “That’s the Sta. Rita Hills,” she says.  “Natural acidity.”

Shai Cellars
Shawn Shai Halahmy poured an outstanding 2009 Grenache ($24) which has a big bouquet mixing cherry candy and coffee, with a nice tart edge on the palate. 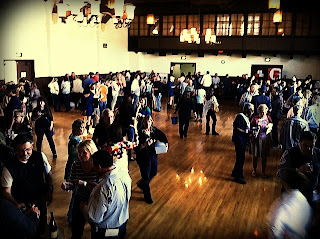 Tercero Wines
Every year about this time, Larry Schaffer is eager to share his newest rosé with me.  True to form, the 2012 barrel sample is a funkfest on the nose.  “That’s the McGinley Vineyard Mourvèdre talkin’,” says Schaffer.  Dry and delicious, it will be bottled in March.  The Tercero 2011 White Hawk Vineyard Viognier ($20) is loaded with floral aromatics and the acidity hangs in there despite the lushness of the mouthfeel.  His 2009 Larner Vineyard Syrah (barrel sample) has logged 40 months in oak and has an enormous nose to prove it.  Schaffer saw my reaction and smiled, “Yeah, I’m an aromatics kinda guy.”