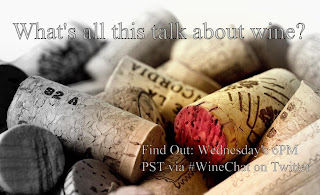 It was so nice to be included in the #winechat on July 17th, 2013, the subjects of which were some amazing white wines of Santa Barbara County, wines that are perfect for helping to beat the heat of the warm weather of summer.

For the uninitiated, #winechat is a weekly gathering of wine lovers on Twitter, directed by Protocol Wine Studio.  You don’t need an invitation for this affair, simply search “#winechat” and you are seeing the live stream.  Join in if you like, or just drop in to see what people are tweeting about on Wednesday evenings at 6:00 p.m. PT.

On this particular #winechat, moderator Bill Eyer (@cuvee_corner) was joined by Morgen McLaughlin (@sbcwinelady).  She is the recently installed Executive Director of the Santa Barbara County Vintners Association.  The SBCVA was kind enough to provide me and about ten other wine writers with a battery of six white wines from Santa Barbara County for the purpose of the event.  Further disclosure: I am a huge fan of Santa Barbara County wines and love having such a great and diverse wine region in my backyard. 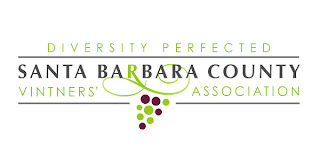 The SBCVA was established in 1983 and currently has over 100 wineries and more than 20 vineyards as members.  Sporting over 20,000 acres of vineyards and 65+ varieties, Santa Barbara County's wine industry has gone from next-to-nothing to a billion dollar business in less than 35 years.  As you might expect from an organization of wine people, the SBCVA has a big heart, too.  They have helped raise more than $40 million to aid folks around the world.

What makes Santa Barbara County unique among California wine regions are the transverse mountain ranges which make for distinct microclimates.  The ranges run east and west, rather than north and south, so the cool marine influence of the Pacific Ocean is channeled inland across the county.  Chardonnay, Pinot Noir and Syrah are the three top varieties in SBC, particularly in the western part of the region closest to the ocean.  In the eastern part of the county, Rhône and Bordeaux varieties do quite well.

Winemaking in Santa Barbara County began in 1782 when Father Junipero Serra brought for planting cuttings of what would come to be known as Mission grapevines from Mexico.  Sacramental wine was the impetus, but Spanish rancheros also grew grapes and made wine for less lofty purposes.

In 1884 Justinian Caire imported vines from France and planted a 150-acre vineyard on Santa Cruz Island, just off Santa Barbara's coast. He made award-winning wines there until 1918.  Prohibition ended his efforts and stymied the entire wine industry in California and the rest of the US.

After Prohibition, a couple of UC Davis viticulture professors tabbed SBC as one of the state's potentially great grape-growing areas.  It was not until the 1970s that grape-growing and winemaking really took off in SBC. Through the '80s, experimentation pinpointed which grapes did their best in which locations.

Here is what all the fuss is about, the beautiful and varied white wines of Santa Barbara County.  This selection of six wines shows the diversity of SBC's terroir. 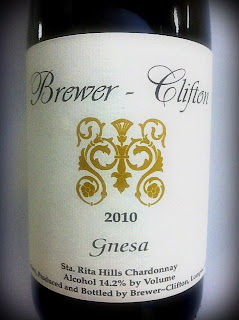 Greg Brewer and Steve Clifton use grapes from the Sta. Rita Hills to make their Chardonnay and Pinot Noir in Lompoc.  Brewer is also winemaker at Melville and has his own label, diatom.  Clifton owns Palmina Wines.

Brewer and Clifton made 288 cases of this stunning Chardonnay, which retails for $48.  Lee Gnesa (knee-sa) planted his sandy, four-acre plot in 1996.  It has been farmed by Brewer-Clifton's vineyard team since 2009.

This wine's bouquet is a beautiful example of earth and oak playing off the lemony fruit.  It appears as a lovely yellow-gold in the glass and tastes of sweet citrus, cantaloupe, herbs and spices.  The acidity is fantastic and there is a touch of chalky salinity that shows on the palate.  At 14.5% abv, it's a fairly hefty white, but the Gnesa Chardonnay does not mimic the old-line "big California Chardonnay" stereotype.  It's a lean, mean Chardonnay machine. 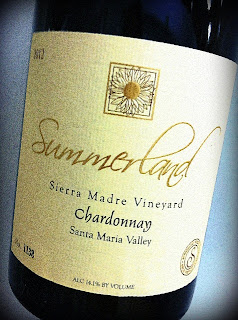 Part of Summerland's Single Vineyard Collection, these Chardonnay grapes come from the Sierra Madre Vineyard, one of the oldest vineyards in the AVA.  The wine turns in a 14.1% alcohol number and retails for $35.

Summerland Winery sources grapes from up and down the Central Coast AVA and produces the wine in Santa Maria.  The cute little seaside cottage tasting room is in Summerland.  Owner Nebil "Bilo" Zarif and winemaker Etienne Terlinden produce some outstanding boutique wines, some of which are popping up on Los Angeles restaurant wine lists with increasing regularity - usually the Pinor Noir.

Upon first tasting, I thought, "this Chardonnay is for those who like a good deal of oak influence in their wine."  From the golden color, to the rich and spicy nose to the buttery palate, every stave of oak seemed apparent to me.  It turns out the wine didn't really see that much oak, though - fermented and aged six months in French oak barrels, one-third new.  Malolactic fermentation was not completed and the lees were stirred every couple of weeks.

The nose is bursting with pineapple, lemon and tangerine aromas while an undercurrent of vanilla oak spice carries the sideshow along.  The palate boasts tropical fruit and citrus layered with some herbal elements and a bit of oak spice.  Putting a chill on the wine reduces the effect of the oak in both aroma and flavor.  There's also acidity a-plenty, so it is definitely a food wine. 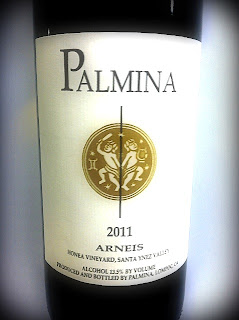 Steve Clifton and his wife Chrystal make wine from Italian grape varieties, and the Arneis grape hails from Piemonte.  Translated variously as "whimsical," "rascally" and "a little crazy," it seems to have been named as a winemaker's grape.  Not to mention that it is sometimes ornery and difficult to grow.  This Arneis is grown in the sandy soil of Honea Vineyard, in the Los Olivos district of the Santa Ynez Valley.  Alcohol registers at 13.5% and this wine retails for $20.

The Palmina website extols some of the virtues of Arneis as: "a delightful aperitif, but also a wine with enough body and personality to hold its own with a wide range of strongly flavored food – prosciutto, pesto, grilled seafood.  Arneis is also a white wine that will continue to evolve with a few years of cellar aging."

It gives a golden straw hue in the glass and smells quite interesting.  Floral?  Yes, but it's more like the flowers and their stalks.  Citrus?  Yes, a nice spray from an orange peel.  There are scents and sensibilities of herbs and spices, too, with a mineral undercurrent.  On the palate, apricots hit me first, with a dash of green tea in tow.  Minerals are even more noticeable here, and a vibrant acidity runs through the sip just like it belongs - which it does.  It finishes with a gorgeous salinity. 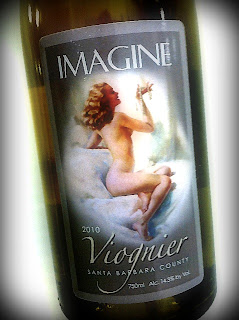 The grapes are from Paradise Road Vineyard - they call it Paradise Mountain - in the eastern end of the Santa Ynez Valley.  At a thousand feet in elevation, the vineyard gets three times the rain of the valley floor.  Winemaker Ross Jay Rankin began producing in the late 1990s at the lovely Lompoc Wine Ghetto.  He now operates in the state-of-the-art Terravant facility in Buellton.

This $24 wine blows a 14.5% abv number  and it experienced 100% malolactic fermentation, imparting a rich creaminess.  It was fermented in steel, then half was aged in new French oak for three months, the other half in steel.

The Imagine Viognier leaves little to the imagination.  Lovely golden in the glass, its sweetly floral nose is laced with the aroma of nectarines.  On the palate are peaches and melons.  The lovely smell and taste of the wine are supported by a delightful acidity that refreshes and makes for great food pairing.  I liked it with kernel corn and peas, buttered and lightly dusted with sea salt. 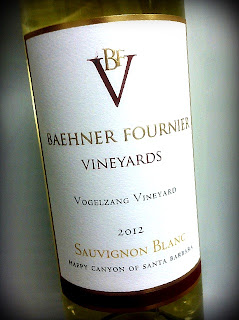 The names belong to Dr. Bob Baehner and Vickie Fournier Baehner.  Their Bordeaux grape varieties grow on 16 acres of hillside vineyards in the east side of the Santa Ynez Valley.  Oaks, chaparral and purple sage dot the countryside.  Their vineyards are named for the natural events they both see unfolding on their estate - Sunshine, Rainbow, Moonglow, Misty and Northstar.

From Happy Canyon's Vogelzang Vineyard, these Sauvignon Blanc grapes thrives in the warm eastern end of the Valley.  They say they try for more of a Loire expression than New Zealand, but I find the reverse is true.  This Sauvignon Blanc experiences two-thirds of its fermentation in steel, then finishes in oak, where it stays for six months aging on the spent yeast cells - the lees.  There is a 13.5% abv number, and a retail price of $20.

Steve Clifton - see him in two other wines here - is the consulting winemaker at Baehner Fournier, but the label lists Nick de Luca as winemaker on this white wine.

The nose gives off a lively grassy aroma, with beautiful notes of tangerine, grapefruit and melon.  On the palate, the grapefruit comes forth in mighty fashion and carries some orange peel along with it.  The acidity is very nice, but it doesn't break out the razor blades.  It's more of a lush experience imparted by the wine's time spent resting on the lees.  The wine is as fresh as can be, with a touch of creaminess that lasts into the finish. 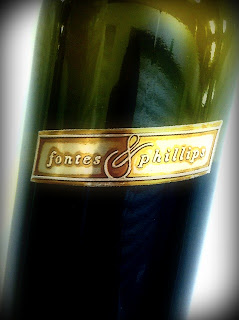 Another husband/wife team, Alan Phillips and Rochelle Fontes-Phillips started this Santa Barbara County small-lot venture in 2008.  Their separate wine paths crossed in the Santa Cruz Mountains - he in the cellar, she in the office.  Their Sauvignon Blanc is whole cluster pressed, steel fermented and aged, with a 13.8% abv number.   They say the wine is made to emulate the Sauvignon Blanc of New Zealand, using grapes grown in the Santa Ynez Valley.  Only 112 cases were made, and it sells for $18.  The only label on the bottle is a pewter tab, hand-made in South America.

This strikes me as a California Sauvignon Blanc rather than one done in the New Zealand or Loire style.  Pale gold in the glass, aromas of peaches, pears and apricots lie under an herbal blanket without a trace of grassiness.  Fantastic acidity is right up front, while the flavors are mineral-driven fruit with a melon-like herbal sense.  Tangerine lingers on the finish, with a bit of the peel.