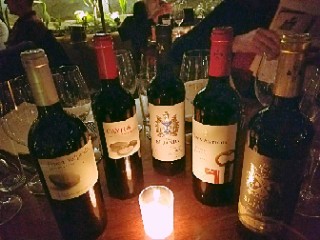 The Familia Martínez Bujanda winery was established in 1889. Today, it's run by Carlos Martínez Bujanda and his sister Pilar. The family has estate vineyards in Rioja, La Mancha and Rueda. I recently had the great fortune to meet Marta Bujanda, Pilar's eldest daughter and the first of the fifth generation to join the family business.

Marta is the export manager, an important position for a wine producer which sells 70% of its wine abroad. Marta came to Los Angeles to pour her wines for a few wine scribes like me, Anthony Dias Blue and Brett Anderson. A swingin' night out with that crew may sound like a full-on vacation, (pause for chuckles) but Marta was in work mode. She enjoyed herself, it was clear, but I believe that had less to do with table mates and more to do with the chance to expound on her family's wines. 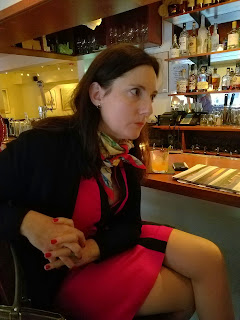 The Bujanda wines poured at dinner - at Michael's in Santa Monica - were all single-vineyard wines, driven by their respective terroir. From Rioja, there are the Viña Bujanda and the Finca Valpiedra wines, from Rueda comes the Finca Montepedroso line and out of La Mancha are the wines of Finca Antigua.

I got to the restaurant a little early and had the chance to enjoy a drink from Michael's bar. I opened with a barrel-aged Martinez, 47 day.  It's gin, sweet vermouth, maraschino, angostura and orange bitters with a lemon twist. It has a lovely cherry red color, and flavors of black cherry, herbs, citrus and vanilla spice. For this cocktail, it should be Christmas.

Here are my impressions of the wines poured during the dinner.

Finca Valpiedra Reserva 2009 - A Tempranillo from Rioja, made by winemaker Lauren Rosillo. It's a Graciano and Maturana blend. Great tannic grip, beautiful fruit, savory notes. This is the steak wine. $40

Vina Bujanda Crianza 2014 - All Tempranillo from Rioja. It spent a year in American and French oak. Grapes from 20-60 year-old vines. Red fruit and vanilla spice, beautiful with the Bronzini.

Finca Antigua 2013 - Cabernet Sauvignon from La Mancha. $10. Here's where you do a double-take. Response at the table was "Ten buncks? Get out!" Fresh and fruity. Fermented in steel, aged 10 months in new French oak. Great structure.

Finca Montepedroso 2016 - 100% Verdejo from the Rueda vineyard named for its "mountain of stones." Grapefruit and lime, less savory than the Viura, but just a little. 2500-foot elevation vineyard planted in 1980. Five month on lees.

Both whites age well, according to Marta, over 12 years at least. Virua is the better ager, she says, and it even picks up some petrol notes with age.