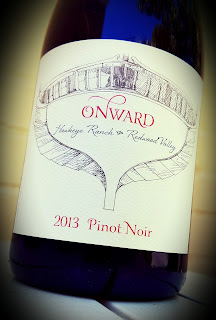 A recent BrandLive virtual tasting featured the wines of Napa-based Onward Wines. They are what the PR department calls, "single-vineyard, site-driven wines crafted by one of the most exciting winemakers out there." They’re talking about Faith Armstrong-Foster, whose "mantra" is, "I could never make a wine I couldn’t afford to enjoy myself." She grew up in British Columbia, a good little Canadian girl who went to school every day in a tiny boat called - wait for it - the Onward.

She says her wines are site-driven, and she owes part of her success to the growers with whom she has partnered - Hawkeye Ranch, Cerise Vineyard, Capp Inn Ranch, Casa Roja Vineyard, Ledgewood Vineyard, Knox Vineyard and Babcock Vineyard. A smaller part of her success could probably be attributed to that little boat. Onward Wines was created in 2009 and she has another line, called Farmstrong.

Hawkeye Ranch is where these cool-climate Pinot Noir grapes originate, grown by Peter and Stephen Johnson, fifth-generation winegrowers in Mendocino County. The grapes come from vines that were planted in the 1970s, some of the oldest in the vineyard.

The wine was aged for a year in French oak, 20% of which was new. Malolactic fermentation was encouraged, and the juice sat on the spent yeast cells - both practices add to the rich fullness in the mouth. It sells for $38.

It's a dark wine, dark in color, dark in aromas and dark in flavors. The nose offers abundant blackberry and black raspberry notes with an earthy base. There is an element of smoke at the top of the glass. The palate is deep and rich, dark fruit joined with a sense of black olives and tea. It leans toward savory, but not without taking the fruit with it. The wine finishes with a little raspberry tartness and a lot of berries that stay for a medium length. It's not too much of a bruiser as far as Pinot goes, rather elegant. It's also easy on the alcohol, a treat for California Pinot. Let your kitchen staff know you’d like a grilled pork chop for dinner.