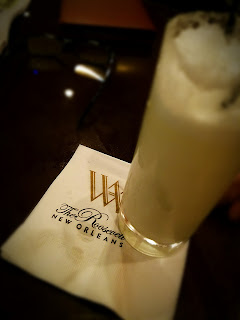 In search of classic New Orleans cocktails on a recent trip to the Crescent City, I happened into the beautiful Roosevelt Hotel Sazerac Bar.  Expansive and done up in as much art deco as they could get their hands on, the bar is worthy of being included on a visitor's itinerary.

Having already had a Sazerac at another French Quarter watering hole, I decided to go with what the bar describes as a New Orleans classic on its own, the Ramos Gin Fizz.  Sweet and frothy with egg whites,  the making of the drink allows the bartender to put on quite a show, shaking heavily and dripping the concoction into a tall glass from on high.  The term "don't try this at home" does not apply, but you’ll likely need to bolster your bar first.

All ingredients except the soda - gin, lemon juice, lime juice, egg white, sugar, cream and orange flower water - are poured into a mixing glass and shaken with no ice for two minutes.  Then, ice is added and shaken hard for another minute.  Think of it as an aerobics session for lushes.  Then, strain it into a Collins glass and top with soda.  Easy, right? 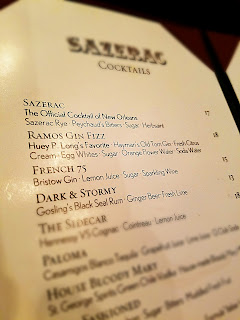 They say it's the orange flower water and the egg whites that turn a regular gin fizz on its head and make it an entirely new beverage.  The cocktail was reportedly created by Henry C. Ramos in 1888 at his Imperial Cabinet Saloon on Gravier Street.  Back in the day it's said to have taken 12 minutes to make one, so a whole crew of 20 or more bartenders had to be on duty during peak hours just to shake it.

The Roosevelt made the drink popular, and former Governor Huey P. Long liked it so much, they say he brought one of the hotel's bartenders to New York to teach another hotel's staff how to make it.  Then the governor could enjoy it when was doing business in the Big Apple.  The Roosevelt Hotel owns the trademark to the name, Ramos Gin Fizz.

Punch offers a scaled-down two-minute version of the Ramos Gin Fizz, if you're in a hurry to get your fizz on.