Get Offa My Grapevines! 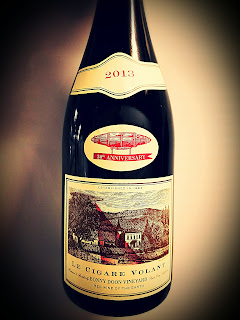 It's the 30th anniversary vintage of Bonny Doon Vineyard's flagship wine, Le Cigare Volant.  Bonny Doon, the Santa Cruz-based winery that's on a self-described "adventure to make naturally soulful, distinctive, and original wine," knocks me out every year with the "flying cigar" release.

The label, by Chuck House, depicts a strange airship sending down a beam of red onto a pastoral vineyard.  Legend has it, in 1954 a UFO scare terrified the winegrowers of Châteauneuf-du-Pape so much that a decree was issued, banning any "flying cigar" from landing and destroying the vines.  To my knowledge, it's still on the books today because, why not?  It's a great story and one of the better back stories for any wine ever.

Owner and winemaker Randall Grahm remembers the 2013 vintage as "cool and elegant" and says the 2013 release is "slightly less muscular than '12."  Grahm expects the wine to age well for 10-15 years.

The Syrah in the mix came mostly from Bien Nacido Vineyard in the Santa Maria Valley, possibly my favorite vineyard, and one which Grahm says has the "closest analogue we have found to a Northern Rhone Syrah."

I love smelling the wines of Randall Grahm.  He makes savory walk and talk and jump through hoops.  This wine, the 30th anniversary vintage of Cigare, brings it home like it always does.  It shows a medium dark color in the glass and on the nose.  There is cassis and licorice, but the savory notes carry the load.  Black olive is the first smell I get, followed by a bit of tar and a whiff of smoke.  Cigar box, leather and bacon fat finish out a complex aroma package.  The palate is delicious as always.  Grahm says the '13 is "less muscular," but I think there's more to it.  This Cigare drinks with the weight and elegance of a Pinot Noir.  Black fruit is forward, while more savory aspects of sage and mint come in to join it.  The tannins are gentle, the acidity fresh and the finish long.