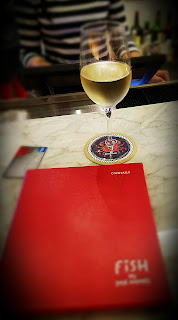 While Denise was playing the slots at the MGM National Harbor, and after I had "finished up" at the blackjack tables, I ambled over to the shopping and dining area.  I had some beers at a sports bar called "Tap," but let's save that for later.  Let me tell you about one of the best snacks I ever had, one that only cost about half what I won at blackjack.

I was tempted to visit the bar at the Voltaggio Brothers' Steakhouse, but I'm really glad I opted for a Spanish wine with octopus at "Fish," by José Andrés.  If there are tentacles on a menu, I'm there.  The octopus appetizer was a double down opportunity if there ever was one.  It came in a marinara salsa, with peanut crunch mixed into it.  Really.  It was the best octopus dish I've ever had, and I've a few really good ones.

When in a Spanish restaurant, get the Spanish wine, I always say.  The wine I chose was made from the Hondarrabi Zuri grape variety of the Basque region.  It's called Txakoli, or Txakolin, or Txakolina if you're really nice to it.  Pronounce the "Tx" like a "Ch."  I dined in my favorite solo way, at the bar.

The 2014 Txomin Extaniz colors up pale gold in the glass and features a nose big with minerals, salinity first.  The palate is savory, salty and citrusy.  There are beautiful nutty notes - all the better to pair with that peanut crunch - with grapefruit and orange peel on the finish.