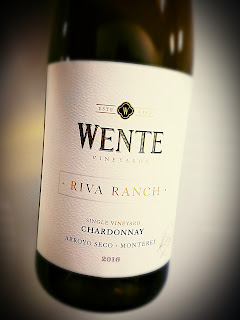 If you love Chardonnay, you probably love Wente Vineyards, and you may not know it.  The grape clone which is used to make 80% of American Chardonnay is here thanks to Wente.  In 1912, German immigrant C.H. Wente planted a cutting from from the vine nursery at France's University of Montpellier.  That Chardonnay plant became the Wente clone of the grape.

Wente is the country's oldest continuously operated family-owned winery, now run by the family's 4th and 5th-generations.  A virtual tasting event was hosted recently by the family historian, Phil Wente, and winegrower Niki Wente, who walked us through five different styles of their line that defined California Chardonnay.

The Wente family is five generations deep into the wine business and are sometimes referred to as "California's First Family of Chardonnay."  They say they were the first in California to make a varietally labeled Chardonnay, in 1936.

Six different clones of Chardonnay grapes were used in making this wine, all from Wente's Riva Ranch Vineyard in Arroyo Seco, Monterey County.  There's a 2% splash of Gewürztraminer in the mix.  The Wentes say Arroyo Seco is the best place in California to grow Chardonnay due to its "cool growing season with the deep gravelly soil" which both help ripen the grapes and balance the sugar and acidity.

About 90% of the wine was barrel fermented in French and American oak, 60% new.  The remaining 10% was fermented in stainless steel.  The wine underwent full malolactic fermentation and was barrel-aged on the lees for eight months.  Alcohol 14.5% abv and it sells for $22.

This Chardonnay is oaked to what I hope is the maximum point.  On the nose, a strong vanilla scent meets a Carmen Miranda hat of tropical fruit, like pineapple, mango and banana.  The acidity is zippy yet the mouthfeel is creamy, thanks to the malo.  Citrus lasts the longest on the finish, but it has to fight it out with the oak to do so.  If you're in the mood for a good ol' fashioned California Chardonnay, this is your bottle.