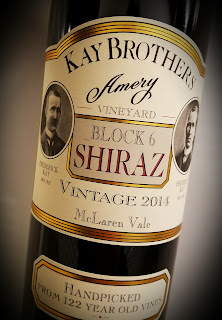 The Kay Brothers - Herbert and Frederick - formed a winery in 1890 in the Australian town of McLaren Vale.  The area is south of Adelaide in South Australia, right next to St. Vincent Gulf.  Their Amery Vineyard produces grapes like Cabernet Sauvignon, Merlot, Nero d' Avola, Grenache, Mataro, Muscat Blanc and a little thing they like to call Shiraz.

The grapes for this wine come from Block 6 of the vineyard, hence the catchy name.  The winery says that Block 6 was planted in 1892, which makes the vines well over 120 years old.  The process of establishing the winery was meticulously recorded in a family diary, some of which is available to read on their website.  The brothers put their backs into running the winery for 57 years, before death claimed them just one year apart.  The following generations were led by Cud Kay, and now Colin Kay.  Duncan Kennedy is the Kay Brothers' senior winemaker.

The 2014 Kay Brothers Amery Vineyards Block 6 Shiraz is the 32nd wine in the flagship series.  The grapes were handpicked from those century-and-a-quarter-old vines.  The 3½ acres which make up Block 6 have varied soil which the vines call home.  The winery says the earth ranges from red loam to heavy clay to gravelly alluvial soils. They say the underlying "South Maslin Sands" geology is extremely complex, with layers of glauconite, limestone, sandstone and siltstone.  Which translates to minerals, minerals, minerals.

The juice for the wine spent ten days on the skins after pressing for maximum color extraction.  Aging took place over a nearly two-year span, in French and American oak barrels, 40% of which were new.  The oak plays a supporting role to the fruit in the Block 6 wine, as it should.  Alcohol hits 14% abv and at $95 retail, the wine is by far the most expensive in the Kay Brothers line.

This Australian Shiraz has four years of age on it.  The dark wine displays a nose rich with flinty minerals, pretty flowers and black and blue fruit.  The palate shows similar, but a little heavier on the fruit.  Still, the earth is plainly there along with cigar box, sage and licorice.  There's a zippy acidity and some fairly youthful tannins which invite a pairing with your favorite steak.