Livermore Valley Cab That Rocks It 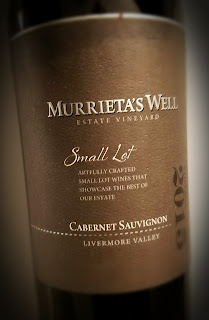 Winemaker Robbie Meyer took to Snooth awhile back to discuss the latest vintages from Murrieta's Well, in California’s Livermore Valley, including a small lot Cabernet Sauvignon that was pre-release at the time.  It's now available, but likely won't be for long due to the small production.

The vines of the Murrieta's Well estate vineyards were first planted in 1884 by Louis Mel with cuttings from the notable Chateau d’Yquem and Chateau Margaux properties, says the winery.  Mel sold the property, lock, stock and wine barrel, to Ernest Wente in the 1930s, and it's still part of the Wente Family estate.  Today, Meyer personally selects grapes from all over the five hundred acres.

He says there is "nothing quite like growing fruit in the vineyard, caring for it in the winery and crafting it into something people can enjoy."  Through the growing, the harvesting and the fermentation, Meyer says blending is where he sees the real art of winemaking.

The 2015 Murrieta's Well Cabernet Sauvignon hails from one of California's lesser-heralded wine regions, the Livermore Valley.  It's 87% Cabernet Sauvignon, 11% Petit Verdot and 2% Malbec, clocking in at 14.2% abv.  The wine got stainless steel fermentation and 18 months aging in French oak, 80% new, 20% second and third use.  Only  27 barrels were produced, and it was released in the fall at $58 retail.

The grapes are estate grown, in their Sachau Vineyard right behind the winery's tasting room.  Some of the Cab came from their Louis Mel Vineyard.

This is an extremely dark wine with plenty to offer on the nose and palate.  Aromas of cassis are joined by cedar, anise, vanilla and a bit of mint.  The flavors are explosive, with blackberries and cherries prominent, savory spice and a zippy acidity to frame the firm tannins.  It's a steak wine, really, but it goes well with stew or chili, too.