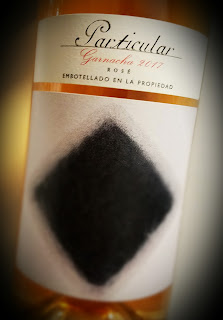 Founded in 1944 by 60 winegrowers in Spain's Cariñena region, Bodegas San Valero is now 700 winegrowers strong, with more than 8,600 acres of vines.  The Cariñena region is in the middle of the Ebro river valley, in Zaragoza, Aragon.  The region earned the first Designation of Origin in the Aragon region in 1932.

The Particular line features a rosé made from Garnacha grapes, which in some necks of the woods are called Grenache.  The website says this is the wine that winemakers make when they make wine for themselves.  Just a few hours on the skins gives the pale coloring of the wine.  Stainless steel fermentation keeps the aromas and flavors fresh.  The pink wine hits only 11.5% abv and it’s pretty inexpensive.

The 2017 Particular Garnacha Rose is a pale wine that doesn't smell inexpensive.  The nose bursts with strawberry and cherry aromas, and there's a hint of the stems adding an herbal twist.  The same fruit holds on the palate in fairly simple fashion, with a bit of lime to go along with a zippy acidity.  It tastes almost tart, but holds instead with an extremely herbal sensibility.  It's not elegant, if that's what you're looking for, but it holds its own with a ham sandwich.