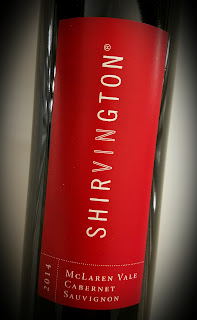 The South Australian winery Shirvington was founded in 1996 by Paul and Lynne Shirvington and their sons.  A plot of Shiraz and Cabernet Sauvignon vines became their first vineyard, Redwind.  The red clay and limestone soil is in Willunga, just south of McLaren Vale.  There they grow Cab, Shiraz and Mataro, better known as Mourvédre.

Peter Bolte takes care of the vines, while Kim Jackson lends her Sonoma and Burgundy trained knowledge to crafting the wine.  The 2014 Shirvington Cabernet Sauvignon tips the alcohol scale at 13.5% abv and it retails for about $32.

This extremely dark wine offers a nose of rough-hewn blackberry with a tiny wisp of freshly sanded wood.  It's a fairly muscular package of aromas, and that heft carries onto the palate.  It's a pleasing bunch of flavors, but I wouldn't call any of them elegant.  This a Cab for a steak that's been bad and needs corporal punishment.  Dark fruit plays for the front row with some oak spice for support.  The fruit is fairly pure, though, and has an interesting dark flair which I find captivating.