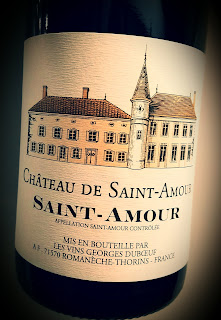 By now, you've no doubt been through the fall supply of Beaujolais Nouveau.  If not, get to work - it's a wine that's meant to be consumed while young.  To be blunt, it's not getting any better in the bottle.

I greatly prefer the wines from the crus of Beaujolais, the ten villages that all offer their own separate and distinct terroirs.  They don’t cost much more than BN, but the difference is like night and day.

The Gamay grapes for Duboeuf's 2016 Château de Saint-Amour Beaujolais were grown in the granite and clay soils in the northernmost cru of Beaujolais.  The Siraudin family owns the estate and has worked with Georges Duboeuf for many years.  The wine was vinified in steel, and is never influenced by oak, so it's all about the grapes. Malolactic fermentation happened in full, which gives the wine a fullness, but the freshness is preserved.  Alcohol hits 13% abv.  It's imported to the U.S. by the fine folks at Quintessential Wines, who provided the sample.

This 100% Gamay wine is from the Saint-Amour cru of Beaujolais.  It smells earthy and grapey with a note of smoke and tastes bold and full.  The dark fruit is almost jammy and there's a splash of tartness that fills the gap.  The wine has a delightful acidity and a firm set of tannins.