A Tribute To Malbec's Women 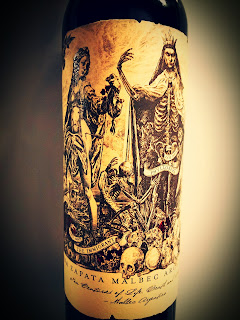 Women across the world are taking what is rightfully theirs.  That includes a record number of women now in the U.S. government.  Once male-dominated industries and businesses are now getting what has been dismissed for centuries as "a woman's touch."  It's happening in the world of wine as well.

Recently, my friend Dan Fredman sent me an email about Laura Catena and her family's Argentine wine estate.  The vineyards were started in Mendoza by her father, long before she ever thought of joining the business and long before she ever dreamed of being an emergency room doctor.  She now oversees the winery and the family's Mendoza estate vineyards in addition to caring for sick and injured people in San Francisco.

Fredman wrote that Catena felt that for centuries, "Men made the wine. Men wrote about the wine. Men collected the wine. It wasn't until the 1980s that women’s contributions began to be noticed and acknowledged."  She was ready to take her turn in the batter's box.

Catena put a label on the bottle for the Catena Zapata Malbec Argentino that tells the story of how her country's most important grape came to the Americas.  More importantly, she says, it tells that story "from a woman's point of view."

Catena and her sister use four female figures on the label.  Eleanor of Aquitaine - one of the most powerful women of the Middle Ages - represents the birth of Malbec.  Madame Phylloxera personifies the near-death of the French wine industry in the late 1800s.  The Immigrant represents the pioneering women leaving Europe for a new continent.  Catena's sister Adrianna is the fourth, symbolizing the modern-day renaissance of Malbec in the new world.

Adrianna says she and Laura simply got tired of the "monotonously male vision" of Malbec presented through the years.  She says the label honors the women involved in Malbec's journey and the roles of women in the wine world.

Winemaker Alejandro Vigil recently pulled down 100-point ratings for two of his creations.  For the 2015 Catena Zapata Malbec Argentino, he took only Malbec grapes from low-yielding plots in the sand, gravel, stony and clay-loam soils and micro-fermented them in brand new French oak barriques and steel tanks.  The wine was aged for 24 months in oak, then another year or more in the bottle.  It's a $140 bottle of wine.

This Argentine Malbec is a full-throated testament to winemaking.  It's inky black, it smells of fire, tar, vanilla, licorice, black pepper and black fruit.  The nose is simply astounding.  On the palate are flavors of blackberry, toasty oak, cigar and sweet spice.  A pairing with lamb would be great, or heavy beef cuts.  Or, just sip and enjoy.  It's good that way, too.