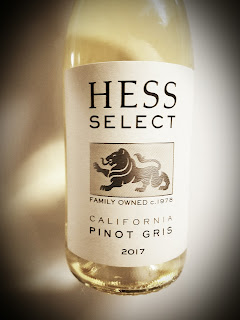 The lion on the Hess label represents the winery and its founder Donald Hess.  With estates in Argentina and South Africa as well as Napa Valley, this winery really gets around.  Hess staked out a claim on Napa's Mount Veeder in the 1970s, when there was still room to move around.  He retired in 2011 and passed the torch to the 5th generation of the family to carry on old traditions and forge new ones.  Dave Guffy is only the second person to lead the winemaking team at Hess.

For the 2017 Hess Select Pinot Gris, the winery promises the best vineyards are used in sourcing the grapes, but the California appellation means they were not all in the same region.  The Hess Select Pinot Gris was fermented in stainless steel tanks and never touched oak.  That helps keep the fruit in the forefront.  Winemaker Guffy's team stirred the lees, the spent yeast cells, periodically to add body to the finished wine.  Alcohol is pretty rich, at 14.2% abv, and the wine retails for $13, but is sold out on the website.

This is a delightful white wine.  I'm usually not wowed by fruity, floral whites.  I like 'em with salt and savory as the lead players, but this one wins me over.  Flowers burst from the nose, but there's an underlying earthiness that grabs me.  Peaches and apricots hit the taste buds with a very faint sense of citrus to hold the reins.  Nice acidity, nothing too abrasive, but very refreshing.  I had mine with a mix of roasted nuts and it was very tasty.  I was able to sip and not think about it too much, which is fine sometimes.