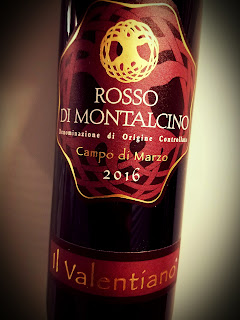 Dry January is so unnecessary.  And so unhappy.  If someone drinks so much that they need to take a month off from it, I feel for them.  Please, drink less and enjoy more.  It was during this social media-driven hiatus that I was given a wonderful Italian wine by Elizabeth and Joe.  I don’t think they were dumping it because it was January, though.  It was a very nice New Year's gift from them.  Movie buffs - especially fans of the horror genre - will want find out more about them at Trailers From Hell.

Fortunately, I hadn't stopped drinking for the month so I opened it right away and swigged from the bottle.  Just kidding.

Here's the story Il Valentiano tells of its history, made short and sweet.  Savino Ciacci got married at the beginning of the 20th Century.  Then came a child, Dino, then a world war which claimed Savino's life.  Ten-year-old Dino became the head of a family, and later a tenant farmer.  Silvano was born, then another war.  After WWII, Dino was able to buy the land he'd been working for so long and handed it over to his son.  In the 1970s, Fabiano was born and now leads the business as the next generation in the town of Montalcino.  His wife, Valentina, is reortedly one of the only true scientists in the area.  "Il Valentiano" is a mashup of her name and her husband's.

The 2013 Il Valentiano "Campo di Marzo" is a Brunello di Montalcino, a Sangiovese wine made in Tuscany.  The grapes are crushed by foot, fermented and aged for two to three years in oak.  A bottle retails for around $30.

This wine is a beautiful Sangiovese, dark and smelling of cherries soaked in vanilla, spices - the whole rack - and leathery tobacco pouch.  The mouthfeel is lively and tannic, with cherry and plum flavors on the palate.  A a savory taste goes hand in hand with the fruit, earthy and brawny.  I'll have it with a Bolognese dish, or steak.