We have a guest today, Patricia Applequist, who writes about the Central Coast and Bay Area out of Paso Robles.  You can visit her at her blog, A Day Off Now. 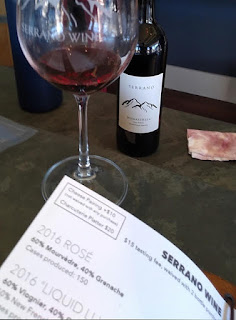 The Paso Robles tasting room on Pine Street at 13th, just west of the 101 Freeway, is unassuming, but it's a doorway into a new generation of winemaking.  The building has housed many before Serrano Winery filled it with their wares, but it's now all about the wine.  Millennial winemaker Sarah Garrett and husband and self-described vigneron Brice each have specific roles to play, but they dabble in each other's areas a bit, too.

They make wines from grapes which are grown in the rolling hills of Paso's cooler West Side, in the Willow Creek District.  The Garretts say the soil is chalky and rocky, full of fractured shale, rocks and even fossils from the area's time as an ancient seabed.  The Russell Family Vineyard is 1,800 feet above sea level now.  Vineyard owner Erich Russell is described as a careful and specific planter, who researched the area fully before putting the vines into the ground in 1996.

The Serrano Wines feature individual grapes and unique blends to appease the tannin resistant tongues of new wine drinkers.  Their 2017 Viognier has the softest citrus nose and follows through on your tongue.  In their 2016 Pinot Noir the grape shines in the glass with a crimson color that translates to a nice pepper-berry mouthfeel.

Sarah and Brice were curating the vines when I visited in January, pruning as their dog, Sam, supervised.  The Pinot Noir grapes enjoy the fog layer on cool mornings and the heat of the noon sun, even in winter.  This two person team utilizes a strong work ethic that started when they trekked across the country and created Paso Pure gourmet beverages for Rabbit Ridge in 2015.