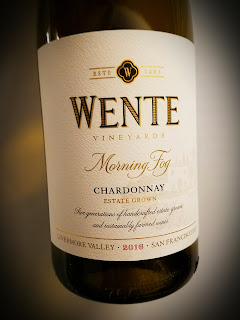 Wente Vineyards in the Livermore Valley changed California Chardonnay forever.  The grape clone which is used to make 80% of American Chardonnay is here thanks to Wente.  In 1912, German immigrant C.H. Wente planted a cutting from from the vine nursery at France's University of Montpellier.  That Chardonnay plant became the Wente clone of the grape.  The Wente family was the first in California to produce a varietally labeled Chardonnay in 1936 made from their heritage Wente clones.

Wente is the country's oldest continuously operated family-owned winery, now run by the family's 4th and 5th-generations.  A virtual tasting event was hosted recently by the family historian, Phil Wente, and winegrower Niki Wente, who walked a group of virtual tasters through five different styles of their line, which defines California Chardonnay.

The 2016 Morning Fog Chardonnay from Wente is made nearly completely from estate-grown Chardonnay grapes, with a 2% splash of Gewürztraminer to sweeten the mix.  The wine was fermented half in neutral American oak barrels and half in stainless steel tanks.  The oak provides hints of vanilla and enhances the mouthfeel while the steel preserves its fruit flavors.  Aging took place over five months sur lie, or in contact with the spent yeast cells, stirred monthly and adding a creaminess to the wine.  Half of the steel portion was racked with no aging.   Alcohol content is restrained at 13.5% abv.

The name of Morning Fog not surprisingly references the coastal blanket pushed by Pacific winds into the bowl of the San Francisco Bay and lured inland by Livermore Valley's traverse, or east- west, orientation.  The wine sells for $18.

This yellow-gold wine rings the "old-style Cali" bell in all the right ways.  A nose of apricots, mangoes and apples is helped along with the smell of buttered popcorn.  Oak treats the palate as well, draping over the tropical fruit like a sunshade.  The acidity is zesty, yet the mouthfeel tends toward creaminess due to the wine sitting on the lees for five months.  The oak is a definite part of the wine, but the effect is softened enough so that it's a pleasure, not a pain.