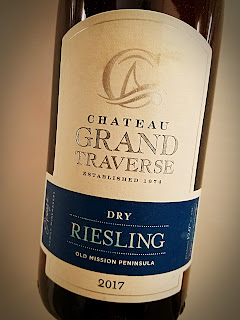 The locals call it paradise on a peninsula.  Michigan's Old Mission Peninsula wine region sticks out of the northwestern edge of the state's main body into Lake Michigan.  Situated on the 45th parallel, about the same latitude where you find Bordeaux, it's a 19-mile spit which juts northward and forms the east and west sides of Grand Traverse Bay.  It's only four miles wide at its broadest point.  They grow wine grapes there.  The blue waters surrounding the land are some 600 feet deep, that produces what they call a "lake effect" which I am told protects the vines with snow in winter, slows bud break in spring to avoid frost damage, and extends the growing season by up to four weeks.

Château Grand Traverse was founded by Edward O'Keefe Jr., who reportedly made the first large-scale planting of Vitis vinifera grapes in Michigan.  He also started the AVA in the 1980s, when he had the peninsula all to himself.  They say the 1987 Chateau Grand Traverse Johannisberg Riesling Ice Wine was served at the White House, at the George H. W. Bush inauguration.

This bone-dry Michigan Riesling is a mineral-driven wine.  Light golden in color, it has a nose of citrus peel and a wet driveway.  The aromas aren't terribly complex, but as Spencer Tracy said, "What's there is cherce."  On the palate there are flavors of apple, lemon and lime with a brisk, chalky minerality.  Acidity is almost racy, certainly zippy enough to handle a sandwich or salad.  The finish is lengthy and reminiscent of an older vintage Riesling, quite nice.