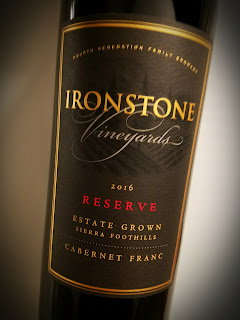 The town of Murphys, where Ironstone Vineyards is located, lies in the foothills of the Sierra Nevada mountain range halfway across the state from San Francisco and farther east than Lodi.  The Kautz Family is a fourth generation of winegrowers and makers, and their company shows the full involvement.  The place is brimming with Kautzes: John, Gail, Stephen, Kurt, Joan and Jack all have jobs at the winery.

The 2016 Ironstone Reserve Cabernet Franc is composed of 85% Cabernet Franc grapes, 8% Petite Sirah, 4% Zinfandel and 3% Cabernet Sauvignon.  They were grown in the estate's Hay Station Ranch Vineyard, some 2,400 feet up in the Sierra Foothills.  The soils range from decomposed granite to volcanic sediment to red clay.  Fermentation was extended and aging took place over 24 months in small barrels made of oak, both French and American.  Nearly two thousand cases were made and the alcohol sits at 14.5% abv, customary for a California red.  It retails for $25 and is a steal at that price.

Ironstone is marketed by Quintessential Wines in Napa Valley.

This wine is very dark, practically black, in fact.  The nose is complex, offering smoky blueberries along with cigar tobacco, vanilla and an herbal note which is very faint.  On the palate is primarily black fruit, with a cherry aspect that sweetens the flavor.  Oak is noticeable, but it isn't a distraction.  The tannins are quite firm and the acidity is juicy.  The finish is lengthy and laden with smoke.  Very tasty.  Pair it with any type of meat dish or even with a cheese plate, especially blue cheeses.