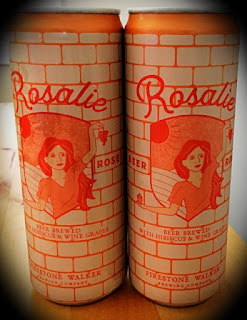 The Paso Robles mainstay, Firestone Walker Brewery, was born a couple of decades ago on the Firestone family vineyard.  Adam Firestone and his brother-in-law David Walker craft a host of beers in the city that's made a name for itself as one of California's wine capitals.

Their first brews were fermented in old wine barrels, and it took two for their leadoff bottling, Double Barrel Ale.  Brewmaster Matt Brynildson now oversees the making of the suds.

They call Rosalie "the rose lover's beer."  It's part of their Terroir Project, an experiment into a marriage between beer and wine.  They say Rosalie blurs the line between beer and wine.  To make it, 100 tons of Chardonnay grapes were harvested by Castoro Winery specifically for Rosalie, with smaller amounts of Viognier, Sauvignon Blanc, Riesling and Muscat used as well.  They used souring techniques on the beer to give it an acidity not usually found in those made with yeasts and malts.  Hibiscus flowers were thrown in during the whirlpool phase, when hops are usually poured in.  After both the beer and the wine juice were made, they were co-fermented using Pilsner malt and judicious hops.  They proudly say it's a true beer-wine hybrid.  Alcohol hits a low, low 5% abv.

I approached Rosalie with trepidation, because I'm not a fan of flavored beer.  I generally feel you can keep your pumpkin-raspberry-hibiscus beers and give me some hops, lots of ‘em.  This beverage surprised me.   It has a rich orange color, more electric than in either beer or wine.  The nose comes on with plenty of floral notes and a sour edge.  The palate shows the malt and hops as well as the hibiscus.  There's a nice acidity, a lighter feel than beer and a little more weight than wine.  I like it, hibiscus and all.