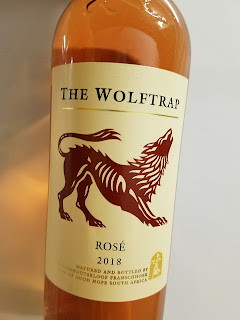 Hey, is it rosé season already?  Maybe it creeps up on me because it's always rosé season at my place.  We are taking a couple of weeks to spotlight some worthy pink wines which will help get us in the swing for spring.

This pink wine comes from Boekenhoutskloof winery, on the Western Cape of South Africa.  They've been in operation since 1776 in the beautiful Franschhoek Valley, less than a hundred years after wine production began in the country.  The winery website indicates that the name derives from words meaning "ravine of the Boekenhout" - pronounced Bookn-Howed.  That's a Beech tree native to the area which is used for making furniture.  The entire winery, vineyards and all, were retooled in 1993.

The Wolftrap Rosé was named after an old wolf trap found on the property.  It must have worked, as there are said to be no wolves anywhere around, although you may spot a leopard from time to time.

This rosé is made from three grapes, 69% Cinsault, 21% Syrah and 10% Grenache.  Winemaker and vineyard master Marc Kent reports that the Cinsault adds perfume on the nose and fresh fruit to the palate, while the Syrah accounts for the spiciness and the Grenache gives the wine a red berry character.  Alcohol is restrained at 13% abv and sells for less than $10.

This wine colors up exotically, a step past salmon and into day-glo orange.  There's cherry and apricot on the nose, along with a healthy helping of earth.  That dirt shows up n the palate, too, with cherry, apple and stone fruit flavors.  I find it an unusual taste, but not off-putting.  It's a bit like some wines I've tried that were made from North American hybrid grapes, although the grapes here have their roots in the Rhône Valley.