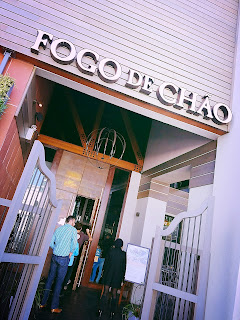 The fantastic, Dallas-based Brazilian steakhouse Fogo de Chão is now serving new menu items for the spring season.  If you've never been to a Fogo location, it's been described as a "meat parade," in which servers keep those choices coming until you throw out the stop sign.

Fogo has introduced seven new seasonal dishes, a new cocktail and a new red wine.  The new meats include Pork Picanha - butchered and prepared with the same simple style as traditional Picanha, then carved tableside - and a new spicy Linguiça Sausage - pork with red pepper, garlic and fresh onion.  I was invited to sample the menu recently at the Beverly Hills location, with manager Sevenir Girardi guiding me along.  Girardi told me the BH store was the fifth in the nationwide chain when it opened 14 years ago.

The new pork meats are excellent, especially the Linguiça, which was an overwhelming favorite for a sausage-lover like me.  The sirloin was done to perfection, as was the Frango - chicken marinated in beer and brandy and wrapped in bacon. 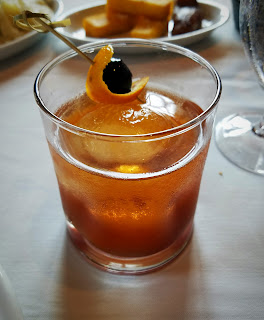 Fogo's CEO Barry McGowan says "Brazilian cuisine focuses on harvesting and serving fruits and vegetables when they are in season and have reached peak flavor," and the revamp also shows up on the salad bar, or Market Table.  I'm not a particularly big fan of carrot ginger soup, but I'll have the Fogo version anytime.  It's vegetarian, gluten-free and delicious, with a bit of a spicy kick to the coconut milk.  The Brazilian kale and orange salad is also fresh, as is the roasted cauliflower salad.   The Bosc pear slices pair nicely with bleu cheese.

Dessert also got a new dish, one that Girardi says came straight from Brazil.  The Crème de Coconut combines freshly-shredded coconut with condensed milk and cream, baked in the oven and served warm with ice cream and a little lime zest.  I had this instead of my typical Key lime pie, and was glad I did.

There's a new cocktail at Fogo de Chao for spring, the Blood Orange Manhattan.  The bartender mixes Buffalo Trace Bourbon with a splash of Carpano Antica, a dash of blood orange and angostura bitters.  It is served over rocks, and the loads of citrus and its easy-drinking nature make it a great seasonal choice that should be a fave right through summer. 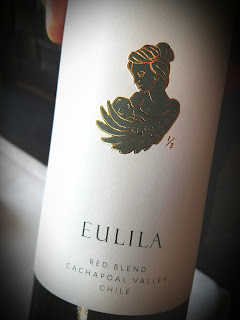 Born and raised in Brazil, Oliveira moved to the United States in 1985, determined to achieve the American dream. Following a chance encounter with the founders of Fogo de Chão while in Dallas, she joined Fogo as the brand's first female manager and, eventually, executive.  She's considered today to be the heart and soul of the organization, affectionately known as the Fogo matriarch.

Created by Viña Vik for the Fogo de Chao restaurant chain, this wine blends 48% Carmenere grapes, 30% Cabernet Sauvignon and 22% Syrah into a food-friendly delight.  The wine smells of earth and dark fruit and has a savory edge to the fruitiness on the palate, with excellent acidity and tannic structure.  It hits 14% abv on the alcohol scale, a little lighter than wines of this type usually are, and it sells for $76 bottle in the restaurant.

Fogo de Chao is not a seasonal choice for me - I’ll go anytime, no arm-twisting required - but their springtime focus adds a few new reasons to stop by.