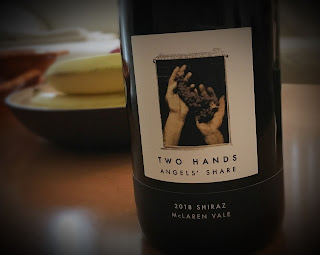 Australia's recent trouble with wildfires - 42 of them the last time I checked, 17 burning out of control - have prompted an outpouring of love from around the world.  It has also prompted at least one Aussie winemaker to donate the proceeds of the pouring they do in their tasting room to help in the effort.

Two Hands Wine is donating, for a two-month span, the take from their Cellar Door tasting fees to the victims of the Cudlee Creek fires near Adelaide.

Publicist Donna White tells me that Australian Red Cross has, since July, assisted more than 18,600 people affected by the fires.  The New South Wales-based Wildlife Information, Rescue and Education Service Inc., Australia's largest wildlife rescue organization, is accepting donations to fund the rescue and care of animals affected by the fires. Learn more at wires.org.au.

Two Hands Wine makes a bottling which they call Angels' Share Shiraz.  Medieval winemakers believed that angels watched over the wines, and that they took a share as payment.  It's a reference to the small amount of wine that evaporates from barrels while the wine is aging.

The Two Hands Angels' Share Shiraz 2018 was made from McLaren Vale fruit, in what the winery calls "a true Australian style that will appeal to both angels and mortals alike."  During the 16 days of maceration, the wine was pumped over three times a day to get the most color, flavor and tannic structure from the grapes.  Once the wine was in barrels, malolactic fermentation occurred.  The wine was unfined and unfiltered before bottling.  The wine aged for 14 months in oak which was 12% new American, with the balance being one to eight-year-old American and French oak.  Alcohol is somewhat typical for a wine down under at 14.2% abv.  The retail price sticker reads $30.

This wine is delicious.  It offers a nose of black and blue berries, shoe leather and a hint of black olives.  It’s a deep, rich bouquet.  The flavors are similarly dark, with berries leading the way again.  Black pepper and a nutmeg note also appear, with the fruit staying long on the finish.  There is a good tannic structure, easily enough for a steak or a beef stew.  The oak regimen was nearly all previously-used barrels, so the oak effect is quite nice, not a bit overdone.  Actually, the oak does exactly what oak is supposed to in a wine - accent it and highlight the grapes, not bulldoze them.