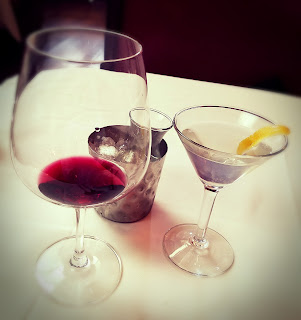 In the heart of Hollywood, there is a restaurant which has remained a constant for more than 100 years.  Musso and Frank Grill hit the century mark in September 2019, while collecting an "Award of Excellence for a Hollywood Restaurant" from the Hollywood Chamber of Commerce.

Musso and Frank has been a favorite watering hole for thousands of Hollywood stars, writers, directors, and studio executives, starting with the one and only Charlie Chaplin.  On a smaller celebrity scale, they also see my wife and I from time to time.

The celebration continues in 2020 with the unveiling of a new signature red wine now being served to diners, the 2018 Peake Ranch Syrah.  The new vintage was blended by Musso and Frank General Manager and Wine Director Andrea Scuto.

The restaurant reports that Musso's 2018 Peake Ranch vintage was marked by the Santa Ynez Valley's "cool temperatures in the late summer and early fall, which provided ideal weather to allow the fruit to have great concentration, with healthy acidity and a good depth of flavor."  The wine was vinified by star winemaker Kevin Law out of Challen Vineyard in Santa Maria.

The Peake Ranch Syrah has a powerful, if mostly fruity nose accented by cardamom and baking spices.  The palate is rich and robust and the tannins are more than able to handle one of Musso and Frank's famous steaks.

The new 2018 Musso and Frank Peake Ranch Syrah is available only at the restaurant, by the bottle ($70) or by the glass ($15) - as long as limited supplies last.  It's perfectly okay to have a glass of it in addition to their world-famous martinis.

Their martinis are possibly even more famous than their steaks.  I had one that was made with St. George Dry Rye Reposado Gin.  It's an interesting and offbeat gin, made with a base spirit of unaged rye, then rested in oak barrels which had previously held Grenache, Syrah, and Tannat wines.  The lightly tinted gin comes off a little spicy, with a hint of peaches and a whiff of wine.  It would probably be more suitable for an Old Fashioned or a Manhattan, according to head distiller Dave Smith.  St. George started small - as in "one guy" - in the California Bay Area in 1982.  Founder Jörg Rupf was that "one guy" and has since retired.  Master distiller Lance Winters now oversees St. George and its production.