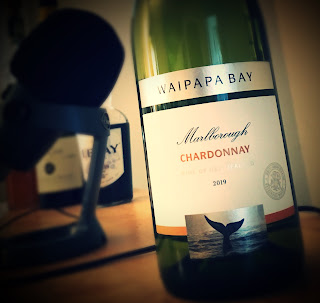 New Zealand is known in the wine world for the country's unique Sauvignon Blanc and Pinot Noir.  The cool, maritime climate lends a wonderful acidity, particularly to the white wines.

Native New Zealanders Brent and Shirley Rawstron have a thing about white wine grapes, and they are currently releasing not only a Sauvignon Blanc but a Chardonnay and Pinot Gris as well.  They gave their wines the name of a favorite local surf spot, Waipapa Bay, which also happens to be a great place to go whale watching.  The area lies between their Canterbury home and their vineyards in Rapaura - on the northern end of New Zealand's South Island.

Along with the Waipapa Bay 2019 releases, the winery has announced a partnership with Whale and Dolphin Conservation (WDC) - the nonprofit’s first wine industry corporate sponsor.  WDC was founded in 1985 and now spans the globe to lead the charge on protections for whales and dolphins.  A spokeswoman for WDC says, "We are excited to receive the support of sustainably-focused businesses such as Waipapa Bay Wines."  The Rawlstons are just as excited about supporting WDC's efforts to end captivity, stop whaling, create healthy seas, and prevent accidental deaths in fishing gear.

This wine is remarkable.  It is bottled under a screw cap, pings the alcohol scale at 13% abv and retails for about $13.

The nose on this New Zealand Chardonnay is so fresh and green that I thought I had inadvertently opened the Sauvignon Blanc.  Grassy, herbal aromas pop right out, with bright citrus, apple and stone fruit following.  The palate features lemon, grapefruit and apricot (!) with a racy acidity that adds to the freshness.  The wine has some heft to it - thanks to malolactic fermentation - so it plays well in the winter.  I am sure it will be just as welcome in the spring and summer.