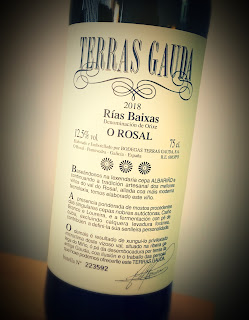 Realizing that many people are stuck in self-isolation due to the COVID-19 pandemic, publicist Gregory+Vine made it possible for wine writers and wine lovers to participate in a virtual happy hour, online with all the social and physical distancing we need.  The event was led by Spanish Wine Scholar Kat Thomas and Rick Fisher, who is also known on Twitter as @thespanishwineguy.  A bottle of Terras Gauda Albariño blend was provided to me so I could take part in the fun.

This wine I tried is from Spain's Rias Baixas region, where Albariño lives.  Specifically, the grapes hail from the O Rosal region within Rias Baixas, spitting distance from the Atlantic Ocean, just north of the Miño River which separates Spain from Portugal.  The 2018 Terras Gauda is a blend of 70% Albariño, 10% Loureira and 20% Caiño Blanco.

Fisher said during the event that the wine regions in the northern part of Spain are called "green Spain" - as opposed, I guess, to "brown Spain."  The land is lush and green up north owing to the large amount of rainfall the area receives.  Thomas chipped in with the info that Rias Baixas and its subregions may be known for Albariño but they also allow red wine grapes, largely Mencia.

O Rosal’s 2018 vintage featured a rainy spring and a hot summer.  The arid conditions dehydrated some of the grapes, making the aromas and flavors inside them more concentrated.  The grapes were taken from the vines in staggered fashion over the month of September.  The wine was fermented in stainless steel tanks, where it rested on the lees for three months before being bottled.  Winemaker Emilio Rodríguez crafted a wine which offers both striking acidity and full ripeness.  Alcohol clocks in at a restrained 12.5% abv  and it retails for $26.

This is a great Rias Baixas wine.  It is complex, with a nose going light on the flowers and heavy on the fruit - lemon and orange mainly.  There is also a touch of lanolin and a hint of apricot.  On the palate, it's fruit up front, with some serious salinity and a very nice acidity that’s as fresh as springtime.