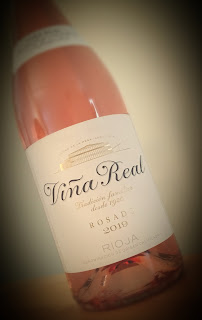 Spanish wine is a thing unto itself, but I suppose one could say that about French wine, German wine, Portuguese wine, Israeli wine, and on and on.  But it seems especially true for Spanish wine.  It was the wine of Spain that originally got me interested in the wine world.

The 2019 Viña Real Rosado is produced by the big Spanish wine company CVNE, which stands for Compañia Vinicola del Norte de España.  The outfit was founded in 1879 in the Rioja town of Haro by two brothers and is still run by their descendants.

Under the CVNE umbrella, the first Viña Real wines were released in 1920.  The winery says the vineyards run from the mountains of the Sierra de Cantabria down the slope towards the Ebro river basin.  They say "the mountains protect the Rioja Alavesa subregion, where the Atlantic climate is combined with calcareous and clay-based soils."

The 2019 Viña Real Rosado is made from Garnacha, Tempranillo and white Viura grapes grown in Spain's Rioja region.  Alcohol tips only 12.5% abv and the retail price is $14.

The 2019 growing season was reportedly a healthy one in Rioja Alta and Rioja Alavesa.  Rains resulted in less fruit, making the grapes more concentrated and earlier ripening.  The grapes were given several hours of skin contact in stainless steel tanks - enough for the salmon pink color - but they were not pressed.

The nose carries plenty of ripe, red strawberries with a hefty herbal influence, as if the green stems are included.  On the palate, the fruit elbows the green out of the way, but a lovely, earthy apricot flavor is introduced.  Acidity is good, if not ripping, and the wine’s finish is rather lengthy and very pleasant.