The Highs And Lows Of Fun Wine 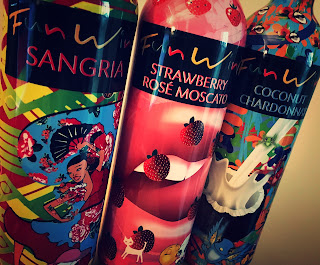 Most wine lovers feel that wine is a fun hobby, and the fun increases the further one goes on the journey.  Does wine need flavoring beyond that which the grapes accomplish?  No, it does not, unless one is seeking a wine-like beverage that does not necessarily have to be wine.  That is usually where the fun ends.

In my younger days in the radio industry, I worked for an owner who wanted to call the radio station "Class FM."  He said he wanted people to know that the station was classy.  I lobbied against the move, explaining to him that the very second you call yourself classy, the class evaporates.  The same principle is at work with the company which calls itself Fun Wine.

Fun Wine has a line of three flavored wines: Sangria, Strawberry Rose Moscato and Coconut Chardonnay.  They are all billed as low-calorie, low-alcohol and budget-friendly beverages that will help get us through the COVID-19 quarantine with some relaxation.  The wines were launched six years ago as Friends Fun Wine, presumably as an alternative to beer.

Inspired, says the website, "by the hip vibes and sultry breeze of Miami," Fun Wine claims their juice is award-winning, and they even come packaged in a fun, also award-winning, way.  The striking label art was created by New York City artist and designer Miguel Paredes, who also appears to be the public face of the company.

As for the origin of the wine - something given at least a passing interest by wine lovers - the labels say only that the juice was "produced in the European Union," and imported by Friends Beverage Group of Miami.  We all know that there isn’t much wine being made in south Florida, but fun is king even if it is imported from Europe.  Forbes cites Germany as the source of the wine.  All three wines contain a modest 5.5% alcohol by volume and sell for less than $10.

I usually have sangria heavily iced, and I sampled the Fun Wines version at room temperature.  It was just as fruity as it should be, if not quite as fresh.  It actually reminded me a bit of a Lambrusco, slightly fizzy and earthy with a grapey overlay.  Not complex, but who’s complaining?

The Strawberry Moscato's Not Bad

The Fun Wines Strawberry Rosé Moscato does contain wine made from grapes, but there is a lot of other stuff at work, too.  Grape juice, flavorings, water and sugar are all listed in the ingredients for all three of their varieties.  It's more like a spritzer than a wine.  It's nothing like a beer.  It has a nose resembling that of a wine made from hybrid grapes, earthy, herbal and grapey.  That good start continues on the palate, soft and earthy, fizzy, dry and uncomplicated.  It's perfect for poolside.

This is where Fun Wines stops being fun.  The Fun Wines Coconut Chardonnay smells overpoweringly like piña colada mix and Hawaiian Tropic tanning oil.  It rather tastes like a piña colada, too, only somewhat watered down, like it has been sitting in the poolside sun a bit too long.  There's a fizzy nature to the sip, which no doubt adds to the fun.  I can see this wine being fun for someone who is not too demanding about what they drink.  It's not a beverage for someone who wants a wine.