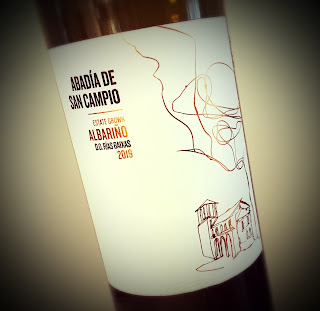 The Terra Gaudas wineries were established in 1989, in the Rias Baixas region of O Rosal, in northwest Spain.  They bill themselves as a premium boutique winery, although their output is around a million and a half bottles a year.  They also have winemaking facilities in D.O. Bierzo and in Portugal's Douro area.

The Albariño grapes which make up Abadía de San Campio were selected from vineyards in Goián, a bit east of O Rosal.  They say the Albariño grown in their highest-altitude, less humid, cooler vineyards ripen slower, allowing for "a fresher Albariño of great aromatic intensity, a greater degree of acidity and smoothness on the palate."

Winemaker Emilio Rodríguez Canas did a wonderful job with this wine, which was fermented in steel tanks to an alcohol level of 12.5% abv.  It retails for $24.

This Albariño smells of honeysuckle, Meyer lemon and a hint of apricot.  On the palate, a zippy acidity arises, yet the wine is creamy in the mouth, with wonderful weight.  Citrus and stone fruit flavors are in the forefront, with a nice orange zest note behind.  It is a beautiful Albariño wine, and one of the more pleasant whites wines in my recent memory.