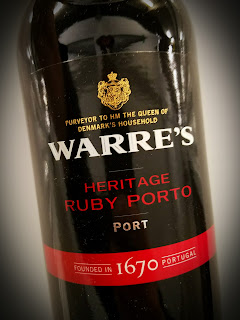 The Symington family calls their Warre's label "the original British Port House."  Pulling grapes from several superb quintas - Cavadinha, Retiro, Telhada - winemaker Charles Symington's family has been at it for five generations.  The company itself was founded in the 1600s.  They recently declared 2017 as a vintage Port year, just like 2016.  It was the first such back-to-back declaration in the 130+ years the Symingtons have been in charge.

I was supplied with samples of several Warre's Ports, and they should be on your radar, especially with "Port weather" expected to arrive - at some point.  Where I live, in Southern California, it's never really "Port weather," so I drink it whenever I like.  These wines are fantastic examples of why Port is such a damn pleasure to drink.

Aged for an average of three years in used oak barrels before being blended, filtered and bottled, Warre's Heritage Ruby Porto is a beautiful Portuguese wine at a great price.  It carries 19% alcohol and sells for around $15. 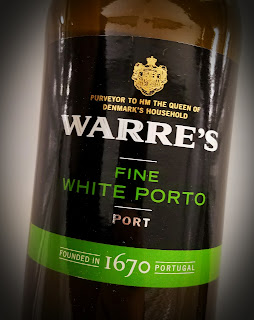 This beautiful Port shows a nose of ripe, red fruit, syrup and smoke.  The palate is young and playful, boasting currant and berries with a viscous mouthfeel and a tannic structure that begs a great piece of cheese.

Warre's Fine White is produced from traditional white grape varieties grown in the Douro Valley - Arinto, Códega, Malvasia Fina, Rabigato and Viosinho.  The winery explains that fermentation takes place "off the skins," which they say makes for a more delicate wine.  Aging took place at lodges in Vila Nova de Gaia in a combination of oak casks and stainless steel tanks.  The white also hits 19% abv and sells for about $15.

This white Port carries a golden tint and gorgeous nose of sweet caramel and stone fruit.  The palate is sweet and fruity with almond notes and a ton of acidity.  It makes a great aperitif or dessert, and will be a fine base for a cocktail.  It even pairs well with potato dishes, cheese and guacamole. 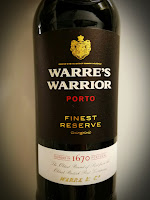 The oldest mark of Port in the world, Warre's Warrior has shipped continuously since the 1750's, with the name branded on the casks.

It is made from grapes grown in quintas in the Pinhão and Rio Torto valleys.  The finest barrels are set aside by winemaker Peter Symington for aging in the lodges at Vila Nova de Gaia.

This Port wine is inky indigo in the glass.  Its nose conveys dark, ripe fruit with an overlay of leather and tobacco.  The palate is rich and dark with a firm tannic structure and a pleasantly long finish. 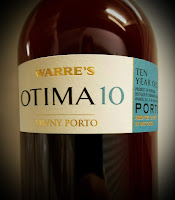 Warre's Otima 10 Year-Old-Tawny balances youthful fruit with a decade in seasoned wood.   All that time in oak turns the ruby hue to a brownish color and makes the palate more delicate.  Warre's also makes an Otima 20-year Port.  Otima 10 hits 20% abv and retails for $32.

The nose on this tawny Port is so full of raisins and hot caramel it can mean nothing except dessert.  The palate reaffirms that feeling, with a sweet taste which brings a little savory along for the ride.  There's enough acidity to make pairing possible, maybe with a slice of pumpkin or pecan pie.

Vinho Verde is the region, not a grape or a style of wine. It's in the northwest corner of Portugal. It's as if you're saying, "I think I'll have a Burgundy," except you’re having a white wine made from grapes you’ve probably never heard before. The grape varieties used in making white Vinho Verde are usually Loureiro, Arinto, Trajadura, Avesso, and Azal. They also make red and rose, and all are youthful wines intended to be consumed soon after bottling. In fact, Vinho Verde means, "green wine." That is not a color reference, but a suggestion that the wine is quite youthful.

The Casal Garcia winery was founded in 1939 by Roberto Guedes, the father and grandfather of those who run the business now. The roots of the region go back much, much further than that, of course. Romans like Seneca the Younger and Pliny both made references to vines between the Douro and Minho rivers, I am told. The first record of wine in the region comes from a year with only three digits in it, if that gives you some idea how far back we're talkin'.

The Casal Garcia Sweet Vinho Verde DOC Vino Branco is made from Trajadura, Loureiro, Arinto and Azal, all the above mentioned grapes, without the Avesso.

I don't know why I think of sweet wine as old fogey wine, but I do. And by sweet, I mean off-dry, which is what this wine really is. It just seems like it would be right at home at a bingo game. This Portuguese white wine hits 9.5% abv, as is typical in Vinho Verde, but sweet is not typical. However, it still has plenty of zip in the freshness department. The sweetness, by the way, comes as fruit, not sugar, much like an off-dry Riesling. There are tangerines on the nose and pears on the palate, but don't sniff or swish for much too complexity. Chill it and have it on the porch, while yelling at those kids to get off the lawn.

Portugal’s grapes and wines are fascinating.  They seem so foreign to the rest of the wine world - hard to understand, but easy to like.

Wines of Portugal served up a luncheon and education hour recently for a group of wine writers, educators and sommeliers in Los Angeles, to which I was happy to be invited. We congregated in the back area at Republique and got schooled by the speaker, Evan Goldstein, below.

The Master Sommelier opened with remarks about a few of the 300 grape varieties that are indigenous to Portugal, and some of the difficulty of wrapping one’s American head around them. He said it's not easy teaching folks about Portuguese wines. "Grapes that people can't pronounce and a language that sounds like a bunch of drunk Russians arguing," he said, "make a rather hazy platform for wine education."

The idea of serving lunch items with the wines, Goldstein said, was to put the wines in the context in which they want to be shown - with food. The wine expert offered some tips on pairing wine with food, and he says it boils down to three key elements.

First, Goldstein says protein is not always the star. Especially in restaurants, you may find several commanding flavors in the side dishes that beg to be addressed by the wine.

Second, he emphasizes the cooking impact. Is the food grilled? Smoked? Blackened? He says all of these cooking styles can overwhelm a wine.

Third, is there a sauce? If so, that's the key to a wine pairing. A wine you would match with plain pasta is very different from the one you’d match with a marinara sauce that goes into it.


Goldstein gave us the chance to mix and match with the lunch, which was served in three, two-stage courses, perfect Portuguese pairings prepared by Walter Manzke and Eric Bost of Republique and Telmo Faria of San Francisco's Uma Casa.

Before we sat, a wonderful aperitif wine was poured, the Esporão Verdelho, Alentejo 2015.  The wine makes a great opener, with a mineral-driven citrus nose and flavors of grapefruit and lemon in a crisp, fresh acidity. The 13.5% abv wine was made entirely from the Verdelho grape, grown in the Alentejo region, in the south-central part of Portugal. It was declared the best wine of the year in that country, the first time a white wine had ever won the honor.


Each lunch course was paired with four wines, from which we were to select the one that best fit the dish, according to our palates. This, Goldstein assured us, meant that there were no wrong answers.

Second Course
Spinach Cavatelli, Forest Mushrooms
I would have preferred a white wine with mushroom, I always do. Of the three reds, the best fit was probably the Luis Pato Vinhas Velhas Tinto, Alentejo, 2011.
Arroz de Pato, Morel Mushroom and Duck Confit Risotto; Seared Duck Breast, Red Wine Cherry Sauce
All three reds did fine with this one, great in fact.

3 Caves Transmontanas Vértice Grande Reserva Branco, Douro 2013
Yes, a white from Douro, in the northern part of country, where Port comes from.
13.6% abv; half gouveio and half Viosinho; light oak
Muted mineral aromas of chalk and lemons, with a slight toastiness. Smooth and earthy in the mouth, full with a light citrus overlay.

8 Wine did not arrive

12 Prats & Symington Post Scriptum de Chryseia, Douro 2013
50% Touriga Nacional, 30% Touriga Franca, 11% Tinta Roriz and Tinta Barroca. The rest, who knows? 14 months French oak; 13.8%
This wine has an easy, rosy nose that is muted and light, but the earthy minerals make a strong showing on the palate. Savory and tannic.

A tasting of Portuguese wines by Esporão took place in almost speakeasy fashion, at a private residence in Los Angeles. Esporão sales manager Pedro Lopez Vieira and winemaker David Baverstock (pictured) were on hand to describe the wines and their terroir to a casual crowd. It was so casual, I was advised that note-taking might be frowned upon. I did it as surreptitiously as I could, scribbling very small on the business cards of the two representatives.

Herdade do Esporão was founded in 1267 in the southern part of Portugal, across the country east of Lisbon. Portions of the estate built in the 1400s were laughingly referred to as "the new parts." Most of the grapes come from the estate, but they do grab a few from more northern areas of the country when needed.

Bob Blumer, our host for the occasion, prepared amazing bites to pair with the wines, in the style of his televised cooking show, Surreal Gourmet. Blumer's expertise with shrimp bisque, lima bean crostini, cod cake with pink mashed potatoes and duck snow cone - duck in an edible cone - left his guests without adequate words to compliment him.

A wide array of wines were poured:

Esporão Reserva 2010 (pictured) - This masterful white wine features indigenous Portuguese grapes - Antão Vaz, Arinto and Roupeiro - with a bit of Semillon, which the winemaker says is a tip of the hat to his Australian heritage. Alcohol is at 14% - "Higher than I like," says Baverstock, "but that is what the grapes want to do." Forty percent of the wine saw oak for six months, on the lees. It is a great oak treatment, with lovely acidity and citrus all over the place. A savory edge of salinity makes this wine irresistible.

Quinta dos Murcas - The grapes were stomped - they call it "foot tread" on the label. This old vine red is bold, big and dark.