"Liar's Dice" is a game played with five dice in a cup. It sounds like it should be played while drinking, because if it’s not, it’s called Yahtzee. It could also be played as dice poker, but really, that’s just not cool. Get a deck of cards.

Murphy Goode's 2013 Liar's Dice Zinfandel was conceived, so the website says, by co-founder Tim Murphy. There were many games of Liar's Dice played while brainstorming this beverage in the one-horse Sonoma County town of Geyserville. One horse, but, like, 37 wineries. Geyserville is actually still waiting for their “cool” status. All the "cool" in the area is currently sucked up by Healdsburg a bit down the road. But Geyserville is cool enough for me, as some really good grapes are grown there.

There is nearly a full dice cup of Sonoma County Zinfandel here, 96%, with the remainder being beefed up by Petite Sirah. Winemaker David Ready Jr. has been head man in the cellar for about 15 years, so he knows his way around the barrels. The wine is a full-throated 15.4% abv and sells for $21.

It's medium dark in the glass and has a gorgeous nose, ripe and spicy. The expected vanilla and clove notes are met with brambly hints of coriander and allspice. On the palate, it's big and bouncy with rollicking cherry and cola flavors rolling over a blackberry base. Cinnamon, cardamom and a nice package of herbs nudge this wine in a savory direction, but it stays closer to the fruity side. Big tannins here, so bring tri-tip.

WINE AND BEER AT LUCKY DEVILS

Meeting friends for a beer is a time honored tradition.  The beverage isn't really important, it's the company and the conversation that count.  However, if all you're talking about is how lousy the beer - or wine - is, it sort of defeats the purpose of the get-together.

There was no such discourse at Lucky Devils in Hollywood.  The beverages spoke for themselves.  A great beer list, a wine list in which brevity left little choice and some tasty snacks combined for a nice little Saturday soiree.

After the usual Hollywood Boulevard hassles - two-dollar an hour parking at the meter, men looking semi-dangerous doing some sidewalk preaching about something or other, LAPD staring intently into the place for an undisclosed reason - we managed to settle into our kitchen-style chairs and let the festivities begin.

Even though it was intended to be a beer gathering, one of the few wines offered caught my eye because it was from the Sonoma County town of Geyserville, a place I visited a while back.  I was impressed with the wines I found there, so I chose a red table wine from Mercury Geyserville called The Jug.  It was an easy-going $7.50 by the glass, but a bit pricey at $19.50 in the 500ml jug.  It appears to be a Bordeaux-style blend from Alexander Valley vineyards.

The Jug is very dark in the glass, inky in fact.  A fruity nose also displays an earthy darkness and some spice.  It really tastes great, with cassis and black cherry flavors accented by spice and smoke.  The finish is a little weak with a sour cherry aftertaste.

Others in the group opted for brewski.  The Hornin' Nettie Madge Black IPA from Anderson Valley Brewing Company is stout-dark with a licorice nose and a tan head that hangs around a while.  The taste reminds me of dates and almonds.  The Craftsman IPA is a more standard-issue India Pale Ale, with characteristics much like Sierra Nevada's Pale Ale.  A golden color and lots of hops will make plenty of summer afternoons more tolerable.


Posted by Randy Fuller at 3:13 PM No comments:

Geyserville, California is a small town in Sonoma County - so small that if you run the stop sign, you'll miss it.  A lot of big trucks barrelling down the highway from Napa Valley do just that, too, so beware if you find yourself at that intersection.  For a small town, Geyserville has a lot of good wine to offer, too.

Geyser Peak Winery, an arm of Ascentia Wine Estates, makes some of that wine.  A recent trip to the Grill On Hollywood - four levels up in the labyrinth known as Hollywood and Highland in the somewhat larger town of Los Angeles - had me eying their Cabernet Sauvignon on the wine list.

We were there with a couple of Denise's old - uh, longtime - friends from the glory days at Lycoming College, a pretty little campus in Pennsylvania where they apparently dined on steamship of beef back in the student days, served from a carving station no less.  I went to Lamar University in Texas and dined on chips and sandwiches from a vending machine.  We used to sit around the Setzer Center and wonder what the rich people were doing.  Now I know.  Steamship of beef.

The Geyser Peak Cabernet would have fit right in at either locale, no doubt served in Riedel stemware next to the beef and swigged from the bottle by the vending machine.

Sonoma County's Alexander Valley is a great wine region, and Geyser Peak shows why.  It's a pretty darned good wine that is still considered a bargain - only $8.95 by the glass at the fancy Hollywood eatery.

The Geyser Peak Cab shows a pretty, dark color with purple edges.  The nose has plenty of cassis and blackberry notes while the palate has a plummy character with some strong blackberry fruit carrying just the right touch of oak effect.  There is some cedar and vanilla - neither overpowering - and an earthy edge with healthy tannins that were nicely held in check.

Despite all that, the wine is an uncomplicated experience, which is more than I can say about the stories of those bygone days with the steamship of beef.
Posted by Randy Fuller at 2:57 PM No comments: 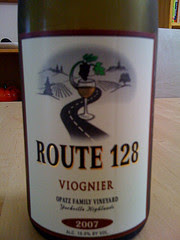 The Bottle:
A sleek Rhone-style bottle tinted brownish-green bears a label showing a color drawing of a winding, two-lane blacktop road. The road cuts through vineyards, much like the actual Route 128 which connects Sonoma and Napa Counties at the northern reach for both. The ABV for this wine is a staggering 15%, much higher than I expected it would be. The Opatz Family Vineyards Yorkville Highlands, between the Alexander and Anderson Valleys, is the source for the grapes.

The Nose: The aromas are hard to figure. Pear and an unusual sort of floral scent are in there. The floral is not overwhelming, though. Abundant minerals are also present.

The Taste: This wine's acidity is pretty high as you would expect at 15%. The alcohol does not dominate, though. The pears are joined by a white pepper spiciness that hits the right notes. This should be a really wonderful food wine.
Posted by Randy Fuller at 9:58 PM No comments: 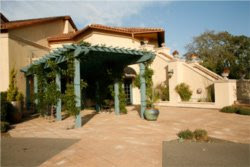 On the way from Napa Valley to Geyserville via Highway 128, there's a driveway I'm glad I drove. That was the one which led to Calistoga's Bennett Lane Winery. A pretty arbor in front of a smallish building provides a fitting entry into the tasting room. Small inside, too, there isn't a lot of room available at the tasting bar. Find a way to elbow in, though. Some very good wine awaits you.

Reserve Chardonnay 2007 - This was billed as a new release, but I think the tasting sheet was printed late last year. The blurb promises Fuji apple, baked pear and toasted hazelnut, but it was all tropical to my nose. A little unexpected, but quite pleasant. This is a full-figure Chardonnay, heavily oaked with the buttery, creamy notes you would expect.

Maximus 2005 - Plenty of oak in this big red. I get lots of cedar, vanilla and spices both in the nose and on the tongue. 64% Cabernet Sauvignon, 25% Merlot and 11% Syrah, the fruit is lush and lasts a good long while. It was my favorite.

Cabernet Sauvignon 2005 - This 100% Cabernet is a blend of Bennett Lane's estate Cab and that sourced from other Napa Valley growers. A big cherry nose greets you and the taste is driven by flavors of dark plums and leather.

Cabernet Sauvignon 2006 - The Cab is augmented by 4% Petit Verdot. It's a very rich wine that, to me, is chocolatey enough to be dessert. But no, they have that covered even better.

Dessert Wine - This beauty is a non-vintage port-style wine of which less than a hundred cases were produced. I don't know the percentages, but it's made with Cabernet Sauvignon, Petite Sirah and Carignane. Beautiful, rich flavors abound. Figs, cherries and some spicy notes put me in mind of Christmas, even though I had been off the hot, dusty trail for only a few minutes.

Posted by Randy Fuller at 5:52 PM No comments: 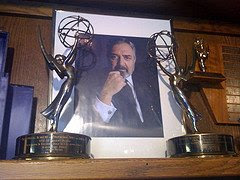 The Bottle: A classic Chardonnay bottle - meaning "just a little too wide for my wine rack" - bears a label with a painting of the head of Bacchus and Raymond Burr's signature. Burr was part owner of the vineyards and winery before his death. Now his partner, Robert Benevides, carries on the business. Winemaker Phyllis Zouzounis came on board in 2006. It's 100% Chardonnay and was aged 11 months in American oak. Only 515 cases were produced. The abv is listed as 14.4% and it cost $28 at the tasting room. The appellation is Dry Creek Valley, and the winery and tasting room are in Geyserville. Mr. Benevides was kind enough to sit with my wife and I on our visit there, out in the front area, with a cool breeze, a glass of wine and a beautiful view to go along with his wonderful company. We are indebted to him for that enjoyable time.

The Nose: Golden in the glass, the wine smells like apples and minerals. It promises a very clean and crisp tasting white.

The Taste: There is a strong mineral presence amid the apple cider flavor. This is not an oak-bomb at all, but there is a hint of wood the flavor. It's crisp, not buttery, and there is a small trace of spiciness. The wine would be a great match with a cold shrimp salad or just a loaf and some cheddar. It goes great with some nice conversation on a warm afternoon, too.

Posted by Randy Fuller at 6:32 PM No comments: