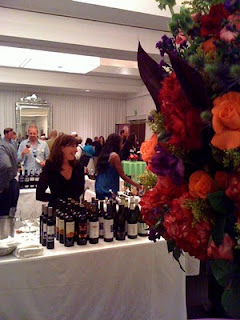 I went expecting nothing more than a smorgasbord of Spanish wines.  I came away with a greater understanding of some grape varieties that had been a mystery to me, and a lesson on terroir, or in this case, terruño that surprised and informed me.
Great Match 2010 - Vivacious Varietals, Tantalizing Tastes - was held on May 12 in Los Angeles at The Bazaar/SLS by José Andrés.  It's a big room for a big event.  Just off to the left after entering the restaurant, the large space is elegant, with huge mirrors on both ends of the room.  Twenty-three tables were arranged throughout to accommodate all the wineries and importers who were pouring.  There were so many wines represented there, I didn't get a chance to sample at every table.  Nevertheless, I stayed busy.
While I am a fan of Spanish wines - it was a Spanish wine tasting that initially piqued my interest in learning more about wine - I do not have an encyclopedic knowledge base on the subject.  I was looking forward to a tasty learning experience, and that's what I got.  I was able to experience wines from the Priorat region, grape varieties like Maturana, Bobal and Monastrell, an unbelievably intense dessert wine along with a Viognier that could have - and did - pass for a Sauvignon Blanc.  It was a great afternoon.
Things I took away from this tasting:
1. The reds have lots of tannins.
2. The whites have a lot of grapefruit.
3. Albariño actually starts to get old after tasting about 20 of them.
Seriously, if you have never delved into the wines of Spain, you owe it to yourself to do so.  The indigenous grapes of Spain are a wonder to taste, and even grapes you thought you knew can deliver a terruño-driven surprise.
I strolled up to one table where a gentleman was already tasting a white wine.  "Smell this," he said, holding the glass right under my nose.  I did, and unflinchingly said, "Sauvignon Blanc."  I know my face must have registered shock when he replied, "Viognier."  That Vallegarcía Viognier from Castilla was the wine of the day for me.  But picking one for second place would be nearly impossible.
I should point out that the printed program for the event was not laid out well for note-takers.  The font in the four-page foldout was tiny, the lines were single-spaced and there was not enough margin for proper note taking.  I had to cobble together my information as best I could on the program while grabbing a brochure here, a business card there and a shelf talker wherever they were offered so I'd remember details.  Mine was not the only complaint, either.  Other tasters had similar gripes and the wine representatives didn't like it too much because it resulted in tasters scrunching down in their limited table space to scribble tiny little notes in between samples.  I was told the show used to offer a more standard-sized book, and in my opinion they should go back to that format.
The following are my notes from Great Match 2010 Los Angeles.  The wines in bold type were particular favorites of mine.
Bodegas Ramón Bilbao
Volteo Tempranillo 2007, VT de Castilla - luscious berries, very dry $10
Volteo Viura 2009, VT de Castilla - blend of Viura, Viognier and Sauvignon Blanc; subdued grapefruit with almond paste $10
Ramón Bilbao Tempranillo Crianza 2005, Rioja - juicy, fruity, young $13
Cruz de Alba Tempranillo 2006, Ribera del Duero - bright yet deep; intriguing minty characteristic $25