Locations: F Is For France 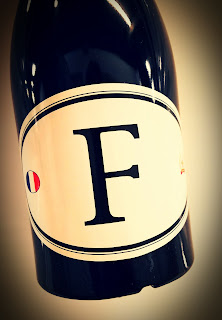 Great wine is all about location.  The location of the vineyard makes all the difference in the end product.  Locations is an experiment of place for winemaker Dave Phinney, of Orin Swift fame, in which he makes wines from all over the world.  These wines are labeled only with a big letter or two in a white oval, depicting the place of origin - F for France, P for Portugal, I for Italy, and WA is for Washington, much like those European bumper stickers.

Phinney sold the Locations brand this summer to Modesto's E and J Gallo, two years after selling off the Orin Swift brand.  A price wasn’t announced, but Phinney will reportedly stay on as the winemaker "indefinitely."

For the fifth release of "F" Phinney has again tapped some of the best regions in France for grapes, drawing upon his network of growers from Rhone, Roussillon, and Bordeaux.  Phinney says the grapes were grown in "exceptional old vine blocks located in revered sub-appellations."  F5 is a blend of Grenache from the Roussillon, Syrah from the Rhone Valley and assorted Bordeaux varieties.  The wine was fermented in oak vats, barrel-aged for ten months and has an alcohol content of 14.5% abv.  It retails for about $20.

The wine is all Rhône on the nose, with a huge tar element along with anise and the smell of a nice box of cigars.  The medium-dark wine has a palate of the northern Rhône valley, too, and a splash from the Roussillon - just hint of Bordeaux, to my taste.  Dark fruit abounds and the oak usage is a treat, not a detriment.  Tannins are firm enough for a hanger steak and the finish lasts a long time with plums and blackberries lingering.  Phinney says drink it now, or let it evolve for four years or so.

The 2013 Chateau Planeres La Romanie comes from the Les Aspres area is in the southern part of the Roussillon region. The wine is a GSM, half Syrah, 30% Mourvèdre and 20% Grenache. Those are the grapes in the mix, as is found often in this part of France. The wine stays in contact with the grape skins for 40 days. Aging happens in French oak for 12 to 18 months. Alcohol is restrained at 13.5% abv. It sells for about $15.

This wine has a wonderfully complex nose. Aromas of blueberry, tobacco, leather and smoke all clamor to get out first. Some anise and tar straggle a bit for freedom. The palate offers a pleasing fruit presentation, but some savory bits and pieces come forward as well. Olives and cigar meet jammy dark fruit and a floral sensibility, with fresh acidity and firm tannins. It's a steak-ready wine that has the tools with which to work.

This is one of those French wines that drive typical American drinkers crazy. The appellation is Muscat de Rivesaltes Protégée. "Burgundy" just rolls off the tongue so much easier. The sweet wine - as in "dessert" - is made from half Muscat of Alexandria grapes and half Muscat Petits Grains. "Pinot" is so much less to remember. Rivesaltes is the AOC for naturally sweet, fortified wines in the Languedoc-Roussillon region in the south of France. With that forgotten, let's move on to the estate.

The Cazes vineyards are biodynamically free of pesticides and insecticides, and they claim to act upon "the true expression of the soil and the plant in their natural environment." They make Vins de Pays, Côtes du Roussillon, Côtes du Roussillon Villages, Rivesaltes and Muscat de Rivesaltes wines at the Cazes facility.

This natural, sweet wine is juiced up to 15% abv. By "juiced up," I mean that the wine is made by stopping the fermentation halfway through by adding wine-based alcohol. That kills the yeast so that a large part of the grapes’ sugar remains, giving the wines its sweetness. This wine is six years old, but Cazes makes them with much more aging. We’ll take a taste of some of those in the future.

The Cazes Muscat de Rivesaltes 2010 smells of sweet peaches and apricots, but an earthy layer drapes over the candy-like aromas as if to try and mask them. On the palate, stone fruit is there, too, and a note of orange zest plays into a rather nice acidity level.  It's great as an aperitif, but pair it with cheese. It's nice with creamy Brie, better with smoked farmhouse cheddar. They advise matching the color of the wine with the color of your dessert.

I spoke recently with Eric Aracil, the representative for the Roussillon Wine Council, the promotion arm for the French wine region at the country’s southern border with Spain. You can read about my conversation with him here.

Organically farmed in the Côtes du Roussillon Villages region in the south of France, the 2012 Domaine Seguela Cuvée Jean Julien comes from the northern part of Roussillon.  It  is made from a 65% share of Syrah grapes, 30% Carignan and a 5% splash of Grenache. It registers its alcohol content at 13.8% abv and sells for about $20.

Jean-Pierre and Trinidad Seguela run the place with an eye toward quality. They organically grow limited yield crops with high concentration and continue that care into the cellar.

The wine is inky dark, with no light passing through the glass. A nose showing smoke, black olives and leather is as inviting as it sounds. The palate is savory and dark. Cassis and blackberries are nearly buried, gratefully, by those olives, some licorice and a hint of molasses. Tannins are quite firm and eagerly await a plate of charcuterie or a lamb stew.

Le Clos de Paulilles Collioure is in the south of the southernmost region in France. It's so far south, it's almost Spain. In fact, it once was Spain. Besides being a valuable military point in the old "stormin' the castle" days, it also has some mighty nice vineyards in the hills. Some of them produce wine for the Banyuls dessert wines you may have enjoyed.

Collioure is also famous for its anchovies. Mark Kurlansky says they are the best in the word in his book, "Salt."

The vineyard terraces of the clos go right down to the Mediterranean, picking up notes of the sea and salt spray. The 14% abv content is quite manageable, although a little higher than usually found in France.

This wine looks golden in a carafe, but pours up yellow-gold in the glass, very close to a faint, faint rosé. Take a sniff and it’s mineral time. Wet rocks and lemon peel, lime and even some tangerine appear on the nose. The sip brings all that into focus with a hint of grapefruit and pineapple thrown in. Acidity is top-notch, but not abrasive. The finish leaves me wishing for a beautiful spring day.

Have it with trout almondine, or just the almonds. I think I would like it with a Caesar salad, extra anchovies.

Rivesaltes is the AOC designation for naturally sweet, fortified wines in the Languedoc-Roussillon region in the south of France.

The Cazes vineyards are biodynamically free of pesticides and insecticides, and they claim to act upon "the true expression of the soil and the plant in their natural environment." They make Vins de pays, Côtes du Roussillon, Côtes du Roussillon Villages, Rivesaltes and Muscat de Rivesaltes wines at the Cazes facility.

This wine is beautifully brown - Cazes calls it amber, of course - and it looks even darker in color than a Newcastle. The nose is a dessert unto itself. Baked raisins, brown sugar and molasses are right up front, and the top of the glass throws a little smoke our way. The palate is as rich as we might expect after getting a whiff of the aromas. It is fairly viscous and has medium-high acidity, with a sherry-esque flavor that highlights the raisins. A salty note sails right into the finish, which is just as much a delight as the nose and the palate.

Pair it with a thick slice of cinnamon-raisin bread for either a lush dessert or a holiday breakfast.

Eric Aracil is the representative for the Roussillon Wine Council, the promotion arm for the French wine region at the southern tip of the country, at the border with Spain.

Roussillon Wines promotes themselves as "The Other French Vintage Wine," although I think  the region needn’t concede so much to the better known areas like Bordeaux and Burgundy. For years I have sought out wines from the south of France as being more in my own personal wheelhouse, and for better value.

I spoke with Aracil recently, and he gave me some insight into the region as a whole, and into several samples that had been provided to me for the purpose.

Roussillon is usually tossed into the collective region of  Languedoc-Roussillon-Midi-Pyrénées, but it occupies the southernmost point in that conglomeration.

Aracil told me that terroir diversity is Roussillon’s calling card. The wide variety of terroirs allow for many different grapes to be used, 23 in all, including four kinds of Grenache. The region produces about 95% still wine.

As you might expect, Roussillon winemakers are working from a heritage that stretches back centuries - 28 centuries, in fact. This, added with the relative "grape freedom" of the area, means that Roussillon’s winemakers have one of the most wide-open fields for exploration and experimentation in France.

Aracil likes to point to the growing of the grapes in Roussillon as the jumping-off point for great bottles of wine. The vines, he says, send their roots down ten meters or more to gather in the nutrients offered by the subsoil and gain protection from the dry climate. He says the vines tend to have a low yield, which is always a good news/bad news joke for winegrowers. The good news is the aromas and flavors are more concentrated in a low yield. The bad news is you have fewer of those remarkable grapes to sell.

Each vineyard, Aracil says, has its own set of microclimates. The contour of the land gives different exposures to the sun, and altitudes range from the valley floor to the mountains, from the seaside to inland. This offers a wide array of acidity levels and ripeness.  Generally, he says, Roussillon winemakers like to avoid overripeness, over extraction and overoaking.

In coming articles, we will explore some specific wines from the region.