Ancient Peaks: It's In The Dirt, I Just Know It Is 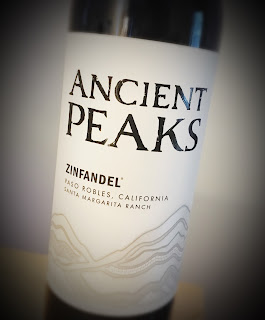 It has been almost a decade since I took a fascinating tour of Ancient Peaks Winery and their estate vineyards near Paso Robles.  Santa Margarita Ranch is the southernmost wine region in the Paso Robles AVA.  The land was once an ancient sea bed, and time has left it high and dry, dotted with old oyster shells which impart their minerality to the grapes grown there.  Science may pooh-pooh that notion, but I cling to the idea that what's in the ground is in the grapes.

The 2018 Ancient Peaks Zinfandel sports grapes which were grown in the coolest region in the Paso Robles AVA, in five different blocks of the estate.  Aging took place over 17 months in French and American oak barrels.  Alcohol hits 15% abv and I picked up my bottle for $20 at a Whole Food Market in Los Angeles.

This medium-dark wine is loaded with blackberry and red plum aromas, but not so much that the savory side slips away.  Intense minerality is at work, a reminder of the oyster shell dirt that is Santa Margarita Ranch.  Black pepper also checks in, along with hints of lavender, cedar and cigar box.  The palate is marked by dark fruit and minerals, with a nice acidity and tannins with a firm grip.  The finish is chalky and moderate.