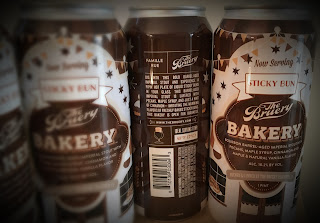 The Bruery makes beer in the northern Orange County city of Placentia, CA.  To say they make beer, and just leave it at that, undersells their passion - making interesting, experimental beers with visceral connections to other types of food.  Their Bakery line features stouts flavored to resemble such pastry items as sticky buns, coconut macaroons, oatmeal cookies and cherry pie.  Here is their tasting room in Placentia.

This is admirable for those who like their beer with flavorings.  I am not in that club, but I realize that I am a minority.  Flavored beers are popping up with increasing regularity in stores and on restaurant and tap room menus.

I received a four-pack of The Bruery's Sticky Bun barrel-aged Imperial stout for review, and I was astounded by the beer's look and smell.  At 10.2% abv, Sticky Bun pours like motor oil, jet black but slightly thinner in consistency.  Its color is blacker than black, with a tan head that leaves lovely, dense lacing on the glass.  The nose has delicious aromas of brown sugar, caramel and mocha, preparing me for what I hoped would be a game-changing experience with flavored beer.

The palate tastes like coffee with maple syrup in it.  That would normally win me over, if it were coffee and maple syrup.  But it's beer, and I found the sweetness to be a little off the mark.  It's pleasant enough, though, so that The Bruery should find plenty of support among the fans of flavored beer.

Mom-In-Law Comes Through With Choice Stout 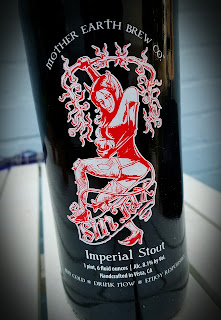 Old jokes about mothers-in-law don't apply here.  My wife's mom loads me up with booze at Christmas, for which I am grateful.  There were two nice bottles, one of gin and another of vodka, and she knew I liked craft beer so she threw one of those into the stocking.  It was an imperial stout that she probably picked up at random.

Or not. A true Las Vegas resident, Verna loves the trappings of Sin City, and a beer called Sin Tax surely beckoned her.

Handcrafted in Vista, California, north of San Diego and east of Oceanside, this beer comes from a great area for the craft style.  When I lived in San Diego decades ago, there weren't so many options, but what was there was choice.  Today, you can hardly miss with a San Diego County bottle or can.

Mother Earth Brew Company makes the Sin Tax Imperial Stout with "premium British crystal and roasted malts melded with a Maris Otter base and American hops."  It's dry at 8.1% abv and they call their flavor-laden creation a "guilty pleasure."  "Don’t let it fool you," they say.  "This is an imperial stout first and foremost.  The peanut butter is simply featured to augment what is already there…a fantastic example of a legendary beer style."

This crazy brew has a nose that knocked me down.  Shades of blackstrap molasses hit first, then brown sugar, then caramel, then coffee.  Talk about aromatic and expressive, this is it.  The medium mouthfeel isn't creamy, but almost - it's smooth and gentle.  Flavors of espresso, Mexican chocolate and cocoa beans fill the flavor profile with dessert ideas.  I had one large bottle, and it satisfied both my sweet tooth and my taste for beer.

Posted by Randy Fuller at 6:07 AM No comments:

Wake Up And Smell The San Diego Stout 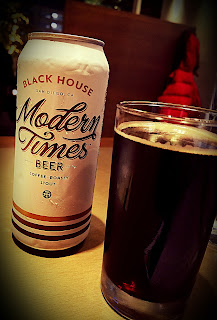 San Diego's Modern Times Beer is an inventive and committed craft brewery. I tried their Orderville IPA a bit ago and loved it. More good news: they make a terrific stout. Black House doesn't knock one over the head, but it sure knocked me out. It's light on its feet and laden with fragrance and taste. Alcohol hits 5.8% abv is this easy-drinking stout. They list the ingredients as kiln coffee malt, oats, pale chocolate malt, black malt, along with roasted barley, biscuit and crystal 60 malts. The coffee used was three-quarters Ethiopian and one-quarter Sumatran.

The Modern Times Black House stout is a must for coffee lovers. This oatmeal-style beer smells like a cup of very strong coffee. It's fairly light-bodied for a stout but carries the heaviest, darkest aromas and flavors. The sip brings not only coffee, but chocolate into the party. The mouthfeel is perfect for food, and it pairs well a fall-influenced roasted butternut squash as well as pan roasted chicken on toasted couscous.

After a hard afternoon of slaving over a hot iPad at Starbucks, I  called on an old reliable wine to soften the blow.  At the Callender’s Grill happy hour, the Celtics and Knicks were going at it on the TV while shop talk and vacation plans were discussed around me.  I had my own vacation plans to think of - a trip to Texas to visit my family and the promise of some Texas wine and food with loved ones I had not seen in far too long.  I'll let you know about that Texas wine in this space soon.

The Ravenswood Napa Valley Old Vine Zinfandel 2009 seems to be a blend of Zinfandel, Petite Sirah and Carignane sourced from various vineyards in the Napa Valley, with a nice happy hour price of $6.75 by the glass.  It’s very dark in the glass and makes its presence known right away.  The nose is big and juicy, with blackberry, black cherry, cedar and spice exploding from the glass.  I think of the Ravenswood tag line, “No wimpy wines,” and figure this must be what they mean.

The palate is lush with dark fruit, and loaded with spicy cinnamon, vanilla and white pepper.  It’s very smooth in the mouth, with firm tannins surfacing on the finish.  It certainly washed the happy hour sliders down properly.

While waiting for my wine, I noticed a tap at the bar for Bass Stout.  When did Bass get tired of being the lighter side of a Black and Tan?  Fairly recently, apparently.  The bartender said it’s a brand new entry in the beer field.  It's not quite as thick and full as Guinness and lacks the creaminess of the venerable Irish stout, but it hits pretty darn close.  Barkeep told me this Callender's (Wilshire, Miracle Mile, Los Angeles) is one of the first places to carry it.