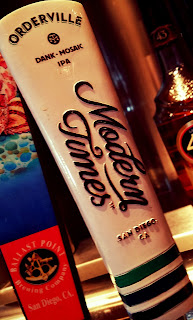 You've probably experienced the same sort of thing that happened to San Diego’s Modern Times Beer, only maybe not with hops. The story of their Orderville IPA is all about great passion, the best intentions, bad luck and a happy ending. Er, a hoppy ending.

Their blog, by proprietor Jacob McKean, describes how they set out to make a "wet-hopped" beer, using freshly harvested, green Mosaic, Simcoe and Chinook hops. They intended to brew the beer and dry-hop it with those wet hops. Not being a brewer, I'm lost already, but they say it sounded cool at the time and I agree with them.

This is where things went wrong. I'll let McKean get all beer-nerdy again. "The harvest, of course, didn’t shake out at all as predicted, and we were forced to brew two entirely separate beers: one with wet Simcoe, another with wet Chinook. The wet Mosaic showed up late—naturally—so we dry-hopped the Simcoe beer with the wet Mosaic. But we ordered so much Mosaic that we literally couldn’t fit 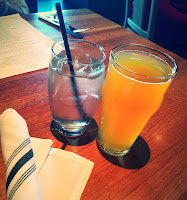 anywhere near enough of it into the fermenter, so we filled the hopback with the wet Mosaic and recirculated the beer through it over and over and over and over again." Then the two beers were blended, and that's Orderville. It is, by their own description, a "completely absurd and radically inefficient" way to make beer. But it's a happy - and hoppy - ending.

This Point Loma beer is one of the most distinctive IPAs I've ever tasted. As an IPA true believer, even I recognize that the style tends to taste almost interchangeable at times. This one most certainly does not. The green hops give the beer a less "roasted" feel. The aroma is fresh and almost biting, less floral and more herbal. The flavor profile has a bit of a cantaloupe note amid the citrus, which is something I've never experienced before. It's dry, it's fantastic, it's food-friendly and it paired very well with a pepperoni flatbread.