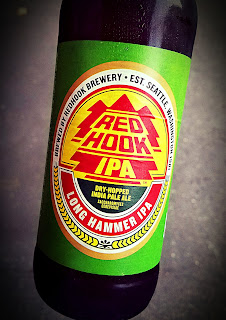 Redhook Brewing was founded in Seattle in 1981, when beer was bad and everybody knew it. The craft beer movement was the best thing to ever happen to beer drinkers. Once I broadened my beer horizon with Guinness, Newcastle, Fuller's ESB and the like, I could only smh - if that abbreviation had existed then - that American brewers couldn't seem to get beer right. Yet they sold damn much of it.

Redhook was a favorite tap choice of mine in my San Diego years, of which there were only two. That handle seemed to be poking its head up from every bar in town, including the one across from my Pacific Beach apartment. I saw it a lot, and I called its name a lot.

Before that, in L.A., my drinking buddies and I had the idea that you could order any beer with the word "red" in its name and feel secure that it would satisfy. Red Stripe, Mendocino's Red Tail, San Diego's Karl Strauss Red Trolley - there were probably more that I don't remember. The trick worked until Michelob, I believe, came out with a red-branded beer of some sort, then Bud. The novelty didn't work anymore. But Seattle's Redhook was always reliable. Plus, it has a cool logo. Oh, and they make a Purple and Gold version which I suppose is in honor of the University of Washington Huskies, although I'm sure the NCAA would not sanction such a thing. The NFL might, but the Seahawks' colors were too ugly for a beer can. Full disclosure: Redhook does actually incorporate an approximation of that green not found in nature on their Long Hammer cans and bottles.

Redhook Long Hammer Dry Hopped IPA is an amber beer has a little oomph and a little less citrus than a typical India Pale Ale. The nose has a nutty, grainy texture - not really too floral at all. That's unusual in an IPA, which is usually hopped to the max. The Cascade hops used to make Long Hammer are administered with care and reason. It drinks smooth and easy, even when the chill has worn off a bit. A nice frothy head whips up on the pour and gets out of the way quickly. An earthy finish provides a nice memory. Alcohol at 6.2% abv means a couple of pints won't do you in. It hits me as a winter IPA, while the style typically makes me think of relief on a hot, sweaty summer day. This will do then, too.